Showing India's commitment to strengthening ties, Prime Minister Narendra Modi today handed over to Nepal an Advanced Light Helicopter which will be used for military and civilian operations. 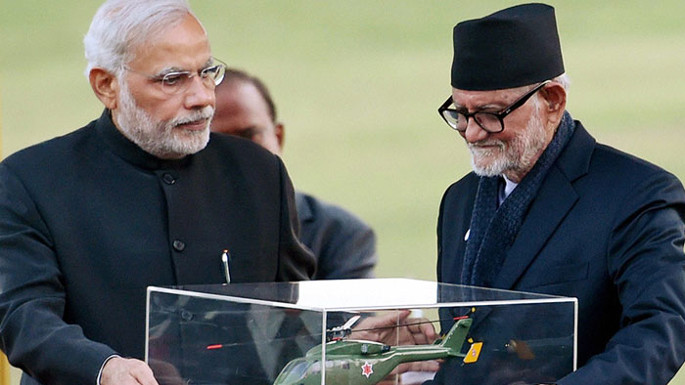 Kathmandu, Nov 25: Showing India’s commitment to strengthening ties, Prime Minister Narendra Modi today handed over to Nepal an Advanced Light Helicopter which will be used for military and civilian operations. Modi handed over the Advanced Light Helicopter (ALH) Mark III Dhruv to Prime Minister and Defence Minister Sushil Koirala at a special function in the Nepal Army pavilion here ahead of the 18th SAARC summit beginning tomorrow. “This will add to Nepal’s shield of protection,” Modi said at the event. Also Read - Modi Confident Reforms in Past Months Will Boost Manufacture & Agriculture; Says Everyone to Get Vaccine Shots

The chopper was handed over by the Indian government to Nepal as per an agreement reached under the Bilateral Consultative Group Meeting. Manufactured by state-owned aerospace and defence company Hindustan Aeronautics Ltd, the Mark III is the latest version of the original Dhruv helicopter and comes equipped with Shakti engines, new electronic warfare suite and warning systems, automatic chaff and flare dispensers and improved vibration control system. Also Read - Bihar Polls: Rahul Gandhi Accuses PM Modi of Not Talking About Problems Like Unemployment Faced by Our Country

The chopper is piloted by two persons and has the capacity to carry 14 passengers. The test flight of the chopper was carried out by the Indian Army in 1992 and it had been used by the Indian Army since 2012. It can safely fly over 20,000 feet in the sky. The helicopter, which can cost anywhere between Rs 60-80 crore, is currently exported to at least three other countries, including the Maldives and Ecuador. “As India is imparting military training and providing physical equipments to the Nepal Army… The helicopter gifted will certainly strengthen the humanitarian assistance and natural disaster relief programme being carried out by Nepal Army,” the Nepalese Army said in a statement.