The Pakistani military claimed to have killed 13 terrorists, including those involved in the Wagah border suicide attack, in aerial strikes, media reported 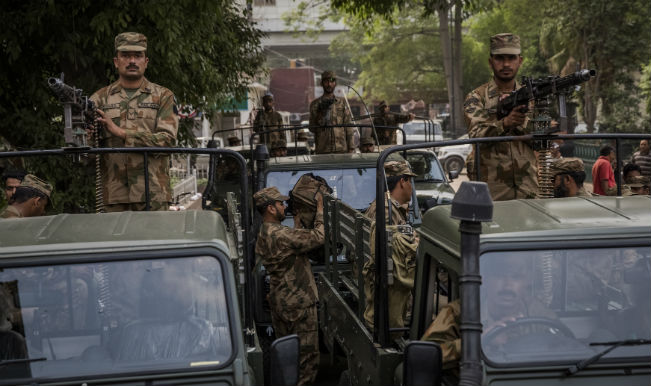 Islamabad, Nov 12: The Pakistani military claimed to have killed 13 terrorists, including those involved in the Wagah border suicide attack, in aerial strikes, media reported. The strikes were undertaken Tuesday in the Daras area of Khyber Agency, on the basis of “credible intelligence about the presence of terrorists involved in the Wagah attack”, Dawn reported citing an Inter-Services Public Relations (ISPR) statement. Read – Death toll in Pakistan suicide attack at Wagah Border rises to 61

Khyber is part of Pakistan’s Federally Administered Tribal Areas (FATA) and is one of the eight tribal areas, which are known as “agencies” in Pakistan. Pakistani Taliban and Al Qaeda-linked militants are believed to have carved out strongholds in this region. During the strikes, fighter jets destroyed three militant hideouts including an ammunition depot, the report said. Intelligence sources believe that the mastermind and handlers of the Wagah border terrorist attack might be among the dead.

The information, however, could not be verified independently. At least 60 people were killed and over 110 injured when a teenaged suicide bomber blew himself up near the Wagah border in Pakistan Nov 2 during the flag-lowering ceremony at the border. Claiming responsibility for the attack, Jamaat-ul-Ahrar, a splinter group of the Pakistani Taliban, had said that the attack was as much aimed at India as Pakistan.

The aerial strikes by the Pakistani military came as part of its offensive against local and foreign militants in the tribal regions of North Waziristan and Khyber.