Who is Journalist Roman Protasevich? Man in Centre of Ryanair Flight That Was Force-Landed To Minsk

Belarusian journalist and activist Roman Protasevich who was wanted in his homeland for his role in broadcasting huge opposition protests against long-time President Alexander Lukashenko, among other charges, was arrested after his Ryanair flight from Greece to Lithuania. The Ryanair Flight 4978 was suddenly diverted to Minsk without any explanation. Meanwhile, Belarusian authorities said that the flight was diverted because of a suspected bomb alert, state news agency BelTA said. However, the alert later turned out to be false.Also Read - Attack on Zee5: Director Lakshya Says John Abraham Actioner is 'Popcorn Summer Movie'

Upon landing at Minsk, Protasevich, was immediately separated from other passengers, and checks of luggage using sniffer dogs were done. As per Belarusian state media, the plane’s diversion came on Lukashenko’s personal instructions, after he had purportedly been alerted to a possible bomb on board. He also ordered a MiG-29 fighter jet be scrambled to accompany the Ryanair plane, according to the Belta news agency. Lukashenko, 66, has led Belarus, a former Soviet republic in Eastern Europe bordering EU states Poland, Lithuania and Latvia, for more than a quarter of a century. Also Read - Vladimir Putin Seen Limping During Victory Day Parade, Watched Display With Blanket Over Lap 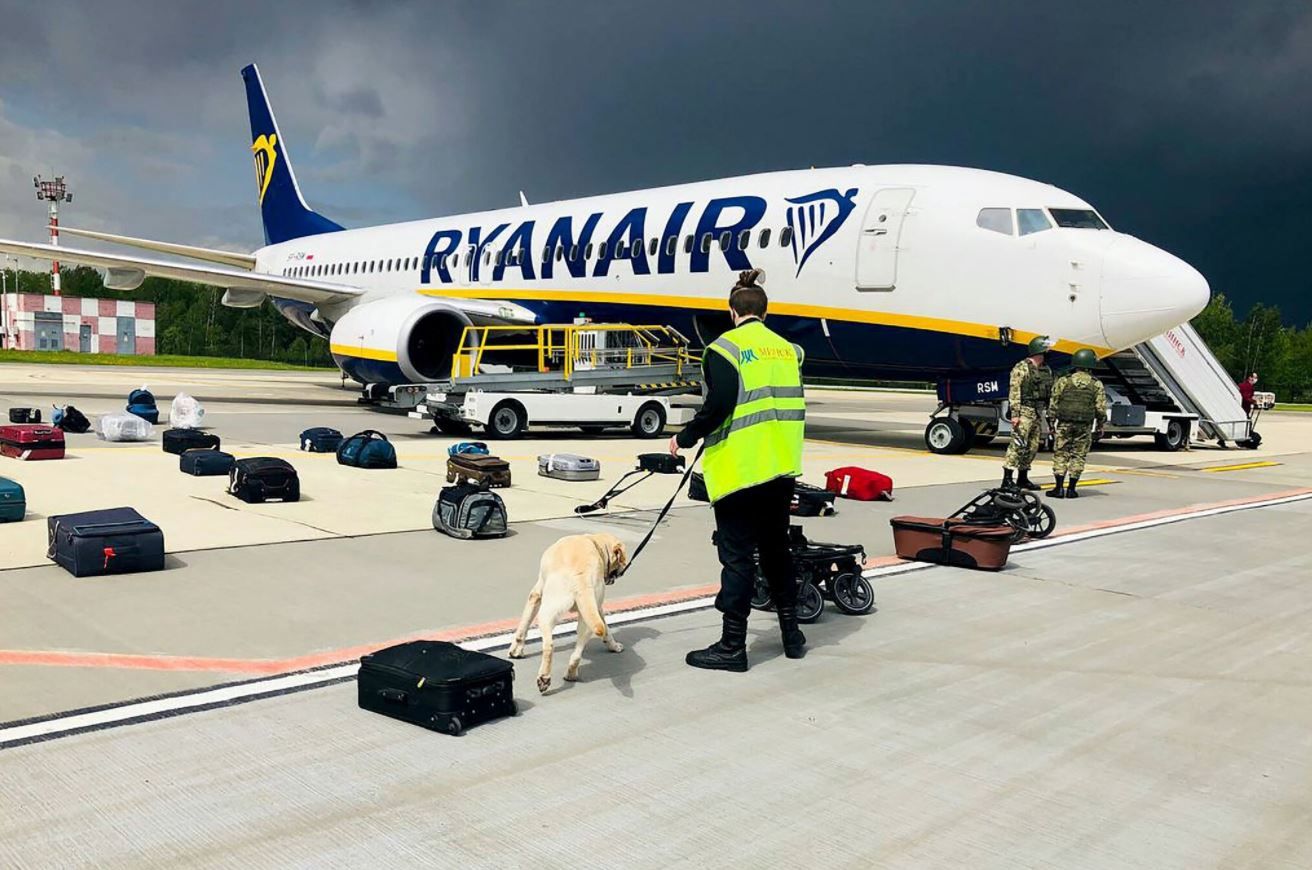 The Ryanair Flight 4978 was suddenly diverted to Minsk without any explanation.

As per reports, the 26-year-old journalist and blogger along with a fellow dissident Stepan Putilo co-founded an opposition Nexta channel on Telegram last year that was used for mobilising street protests. Nexta Live – pronounced “nekhta”, meaning “somebody” in Belarusian have nearly two million subscribers now. Protasevich and Putilo ran the Nexta and Nexta Live telegram channels that helped mobilise protesters during the demonstrations that gripped ex-Soviet Belarus for months after a disputed election last August. Protesters demanded the resignation of strongman Alexander Lukashenko, who has ruled Belarus for over two decades and in secured a landslide victory in an election his opponents say was rigged. Also Read - Canada Imposes New Sanctions on 33 Entities in Russian Defence Sector

The authorities unleashed a violent crackdown on protesters, detaining thousands, many of whom reported torture and abuse in custody. Several people died in the unrest. Following this, both Protasevich and Putilo were put on Belarus’s list of “individuals involved in terrorist activity” last year. The charge of causing mass unrest can be punished by up to 15 years in jail, said a BBC report.

After his arrest, a video clip of Protasevich saying that he was in good health, and being held in a pretrial detention facility in Minsk was being circulated on local TV channels. In the video, the activist can be seen wearing a black hoodie and sitting behind a table in a non-descript room with a pack of cigarettes by his side.

“I confess and cooperate with the investigation” says Roman #Protasevich in a video released by the #Belarusian authorities. This obviously looks like a forced confession; + the marks on his forehead..

Fidgeting his hand during the video clip, Protasevich said, “I am in Detention Centre no 1 in Minsk. I can say that I have no health problems, including with my heart or any other organs. The attitude of employees towards me is as correct as possible and according to the law. I continue cooperating with investigators and am confessing to having organised mass unrest in the city of Minsk.”

On the other hand, Protasevich’s girlfriend Sofia Sapega, 23, was also arrested after the plane landed in Minsk. She is a Russian citizen and a law student at the European Humanities University in Lithuania. 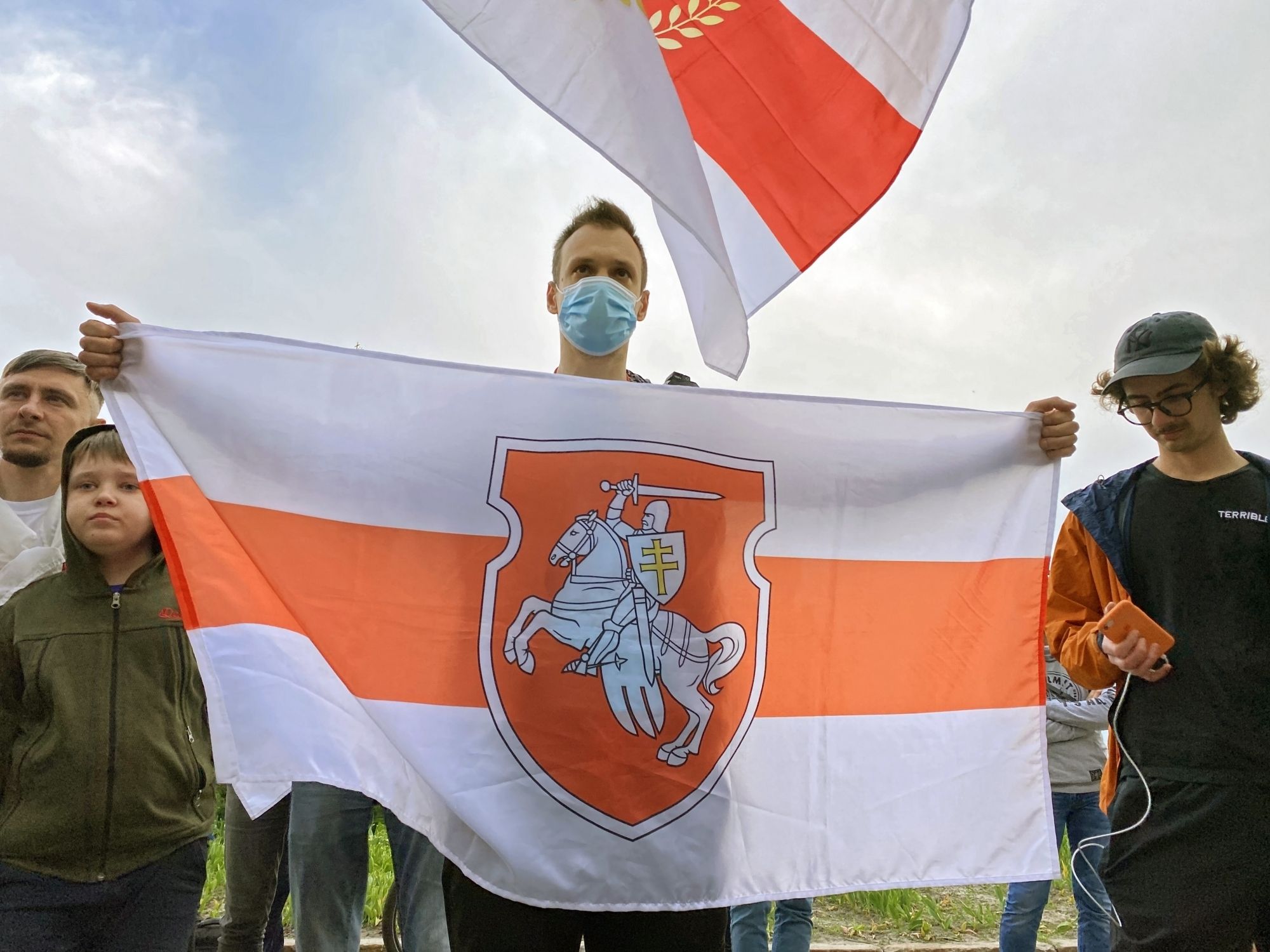 Demonstrators display Belarusian flags during a rally in Ukraine calling for the release of Raman Protasevich.

Earlier, the Belarus Interior Ministry said Protasevich was being held in Minsk and dismissed unconfirmed reports he was hospitalised with a heart condition. “The administration of the institution has not received any complaints about his health,” the ministry said on its Telegram channel.

After the journalist’s arrest, his father Dmitry Protasevich, said in an interview with Belarusian radio broadcaster Radio Svoboda that he was convinced that the careful operation did “not only involve” the country’s secret service. Russia is a close ally of Belarus.

“The operation was of a large enough scale to spit on the entire international community and their opinion,” added the dissident’s father, who called the forced landing “an act of terrorism.” “We are very worried about our son. Unfortunately, we don’t know where he is and how he’s doing,” said Dmitry.

Governments across Europe reacted with outrage, suggesting authoritarian Belarus used the pretext of a safety threat to conduct a “state hijacking” of a civilian airliner to go after a critic.