The Yemeni government and Houthi rebels signed a ceasefire deal late Sunday after days of deadly clashes in the capital Sanaa, an official said 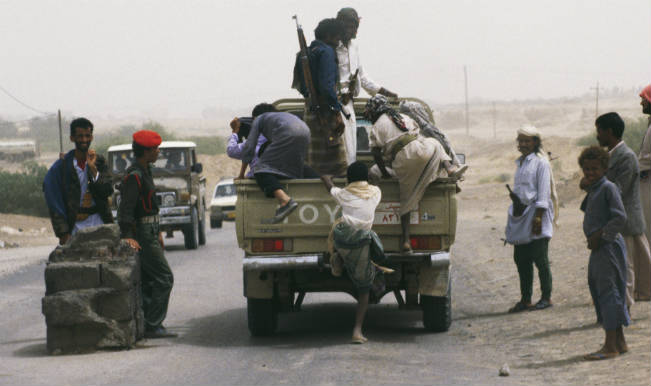 Sana’a, Sep 22: The Yemeni government and Houthi rebels signed a ceasefire deal late Sunday after days of deadly clashes in the capital Sanaa, an official said. The two sides agreed to cease fire in Sanaa immediately, nominate a prime minister in a week and form a government within a month, Xinhua quoted an official as saying. Also Read - Saudi-led Coalition Calls For Ceasefire Between Forces in Yemen's Aden

The Houthi group, however, refused to hand over towns and cities seized in the past weeks, withdraw fighters from all areas in Sanaa and put an immediate end to protests, the presidency sources said. The deal empowers the Shia Houthi rebels as it allows the group to play an important role in forming a cabinet and determining the future control of the army. Also Read - UN wants Yemen's Huthis to stop blocking access to grain warehouse

The peace agreement put an end to the deadly clashes between the rebels and army supported by Sunni militia which broke out Tuesday in northwestern Sanaa that has left more than 200 people dead, including 50 civilians. The deal was signed hours after Houthi rebels took control of key government and army institutions, including prime minister’s office, national TV station and army’s 1st Armoured Division.

President Abd-Rabbu Mansour Hadi Sep 2 announced a peace initiative, in which he promised to replace the government and appoint a new prime minister within a week, in order to end mass protests led by the Houthi group. However, the rebels rejected the initiative and took military offensive against the army and Sunni Islah party, a key party in the cabinet. Hadi’s decision also sparked spat in the government and the prime minister refused to resign earlier this month.

The Houthis have been fighting against the Yemeni army in the country’s north for years. The last ceasefire deal between the rebels and government was reached in 2010, after a six-year war during which the rebels took control of Saada province. However, the group started to further its influence to south in late 2013 when it provoked sectarian conflicts in the northern Amran province, 60 km north of Sanaa.

After it defeated the army and Sunni militia in Amran, the group advanced to the capital, taking a string of towns and cities in the past weeks.