The 14-year-old girl was found in a distressed state with injuries on her private parts on a bridge near Tijara Fatak on Tuesday night in Alwar.

Jaipur: The Congress-led Rajasthan government on Sunday decided to handover the investigation of the Alwar rape case to the Central Bureau of Investigation (CBI). To recall, Rajasthan Chief Minister Ashok Gehlot on Saturday had said the state government is open to get the matter of an intellectually-disabled girl found in Alwar probed by a police officer from outside the city, by the Crime Branch, SOG or the CBI according to her family’s desire.Also Read - Rajasthan Congress to Resume Public Hearing Sessions From May 23

Lashing out at the BJP, he alleged that the opposition party was spreading a “disgusting propaganda” for politics and the party was calling her a gang-rape victim, despite a medical report establishing that she had not been raped or sexual assaulted. Gehlot said that an investigation was underway to find out the cause of the girl’s injuries. Also Read - Rajasthan Bride Marries Another Man After Drunk Groom Kept Dancing & Delayed Baarat For Hours! 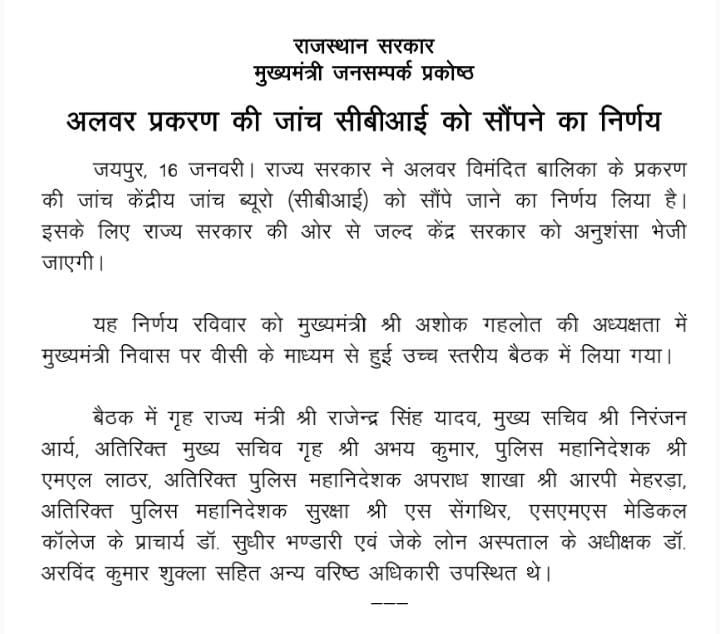 The 14-year-old girl was found in a distressed state with injuries on her private parts on a bridge near Tijara Fatak on Tuesday night in Alwar.  She was found bleeding and taken to a hospital where she underwent a two-and-a-half-hour-long surgery.

According to police, probe revealed that she had travelled from her village to the city on her own, they said.

“The state police is already doing an independent and impartial investigation in the case. Still, if the girl’s family wants this matter to be investigated by a specific officer outside Alwar, or by the CID, Crime Branch, SOG or the CBI, then the state government is ready for this as well,” Gehlot tweeted.

“The government’s intention is clear that there should be independent probe in this matter and the truth of this incident should come to light,” he said.

Earlier in the day, BJP state president Satish Poonia demanded a CBI inquiry in the case. A delegation of BJP leaders also visited the girl’s family in Alwar. Gehlot said that BJP should realise what her family would feel due to its politics.

He said that the family is already distressed and BJP leaders are doing “shameful” politics on the issue. “It is shameful that the BJP is doing politics in the matter and reaching the girl’s house in Alwar while calling it a case of gang-rape,” Gehlot said.