Aamir Khan at FICCI FRAMES 2015: After his anti-AIB stance, actor wants to clean up children’s content in India 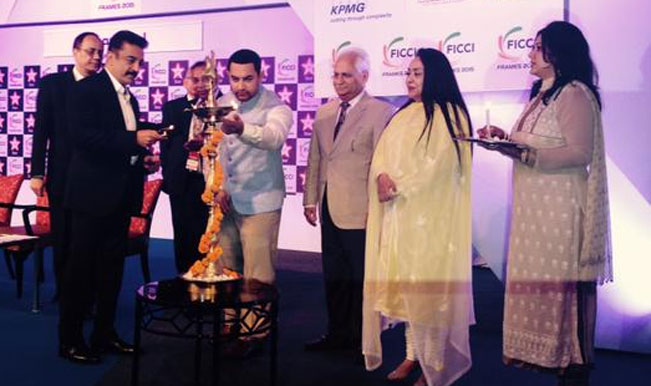 After speaking against the explicit AIB Knockout roast event in Mumbai, actor-filmmaker Aamir Khan now wants to clean up children’s content in India. The Dangal actor was the chief guest at the inauguration of FICCI FRAMES 2015 media conference on March 25 at Mumbai. In a discussion with journalist Sonia Singh, Aamir said that he does not understand or rather pay too much attention to the business side of making movies. That is a little hard to believe, coming from the marketing maverick of Bollywood who earns crores of rupees as his fee as actor or producer or both.

Elaborating on this point, Aamir said that during his research for his TV show Satyamev Jayate, he realised that the country is good in its ‘hardware’ – everybody has the latest phones and gadgets, infrastructure is being built, but where we are lacking is the ‘software’ part. By software he meant the fabric that makes up the people, their feelings and what they do, how they behave, etc. For instance, he said, we can build roads and bridges and dams, but we still have traffic jams and people flouting traffic rules.

Adding further to the software part, he said he strongly felt that children’s content needed to be changed. “When I see the content that children watch, it scares me,” said Aamir. Because, he said, children are watching the content made for their parents. They are not getting to see films or TV shows made to cater to them. (Of course, he was not talking about the cartoon channels here.)

There had been speculations that Aamir is going to make another children’s film after Taare Zameen Par, his award-winning directorial début about a dyslexic child. This could be one of the reasons why Aamir was talking about kids films. The other could be maybe a venture in children’s content on TV. Is he thinking about that?

Aamir did not reveal much, but continuing in his talk on the ‘software’ of the country, its people, he said that qualities like honesty and caring for others need to be inculcated in children. These very qualities are unfortunately looked down upon in today’s society, he said.

Aamir also made a very good comparison of a technologically with-it India that is still ancient in its mindset. “We are very modern in terms of technology; we have the latest mobile phones and cars. But if you look at the matrimonial columns, you will realise that we have not moved an inch.”

Why was Aamir speaking of all this at a business conference? He explained that unless we change the ‘software’ of the nation, and instil the right values in our children, we cannot move ahead in business no matter how many crores of rupees we earned at the box office. As actors and filmmakers, he felt that there is a “huge opportunity for creative people to bring about a dynamic change in society.”

Aamir Khan was speaking in the presence of FICCI regular Kamal Haasan. The two actors revealed about the mutual admiration club they have, adding a little soft touch to the very business-like proceedings on Wednesday morning. (Photo courtesy: RJ Alok Twitter)