Alia Bhatt wishes her friend Shraddha Kapoor on her birthday

Alia Bhatt who is currently busking on the success of her recent release Gully Boy recently shared a picture of herself with Shraddha Kapoor and wished the actor “Happy Birthday.”

Alia took to her Instagram to share an adorable picture with Shraddha and captioned it, “Happy Birthday Fellow Fishy.” Well, we wonder what is secret behind the code name. In the picture, both the actors are dressed in Indian wear and can be seen hugging each other while smiling at the camera. 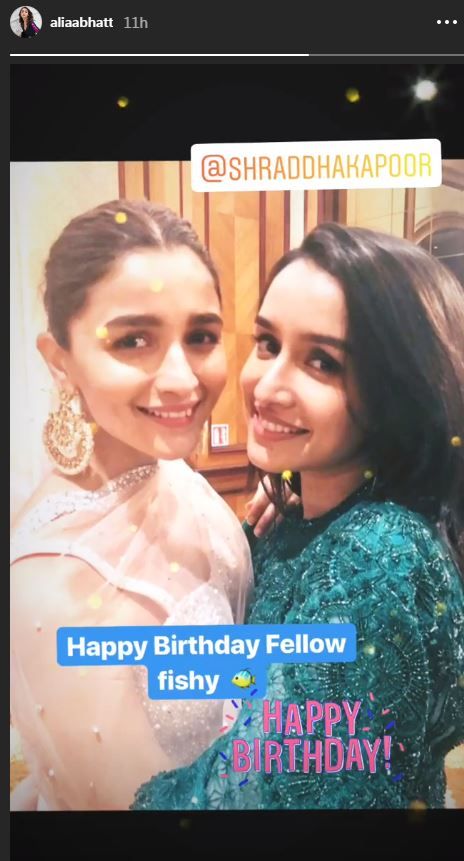 Alia has reportedly signed a biopic on world’s first woman amputee to scale the Mount Everest, Arunima Sinha. Reports suggest that the film’s scripting is underway with Arunima being closely involved in the process.

Alia has reportedly been asked to gain weight for her role in the film. The film is said to go on floors once Alia is done with the shooting of her Father Mahesh Bhatt’s Sadak 2. Another actor who will be starring in the film is Masaan fame Neeraj Ghaywan.

Alia will soon begin shooting for Mahesh Bhatt directorial Sadak 2, starring Pooja Bhatt, Sanjay Dutt and Aditya Roy Kapur in the remake of the 1991 super hit. In an interview with Deccan Chronicle, Alia revealed that she is scared to be directed by her father. She said, “Right now, I am scared to be directed by my father. He is looking at me every day and saying I am going to get through you. He has an X-ray vision kind of thing”.

Shraddha, on the other hand, is in London shooting for Remo D’souza’s film Street Dancer 3D which is bankrolled by Bhushan Kumar, Krishan Kumar and Lizelle D’Souza. The shooting of the film’s first schedule kickstarted on 23 January in Amritsar, Punjab after which the team headed to London for the second leg.