Amitabh Bachchan recalls how that 'favourite chair' will remain empty and that 'corner of preference' will never come to life as his dear friend and mother-in-law of daughter Shweta Bachchan - Ritu Nanda, passes away. Read on.

It’s a tough time for the Kapoors and the Bachchans as one of the dear family members – Ritu Nanda passed away on Tuesday, January 14. In the memory of his ‘ideal friend’, Amitabh Bachchan wrote an emotional note on his official blog last night. The veteran actor remembered the shared moments and highlighted how the news of her death left a vacuum that’s not going to be filled in life.

Nanda was the daughter of showman Raj Kapoor and the mother-in-law of Amitabh’s daughter Shweta Nanda. She passed away at her Delhi home and the entire Bachchan family flew to the capital to pay their last respects to the woman they highly admired. In his blogpost late night, the senior Bachchan revealed how he got the news of her death and how things suddenly shifted from regular as grief surrounded the family. A part of the actor’s post read, “.. that silent knock at the work place .. the hurried expression of worried concern .. the hours that sleep in most parts of the World that seek the midnight .. shuffled steps , soft anxious and disturbed conversations .. and then within a blink .. the lights go out …. she has gone ..” (sic)

Bachchan then described how he saw all the memories being reduced to ashes in a spur of the moment. He wrote about the memories that are going to live forever and things that are going to be associated with the woman everyone loved dearly. A part of his post talked about ‘that empty favourite chair’ and that ‘corner of preference.’

The actor wrote some lines describing the air inside the crematorium. He wrote, “.. polite conversation , of reminisce , of association , of happy times spent together , of the fight and struggle for the ailment for years .. and most of all the loneliness of them that are left behind .. the vacuum .. the emptiness .. the presence that filled up the entire home .. lost and gone ..” (sic). Check out the full post here: 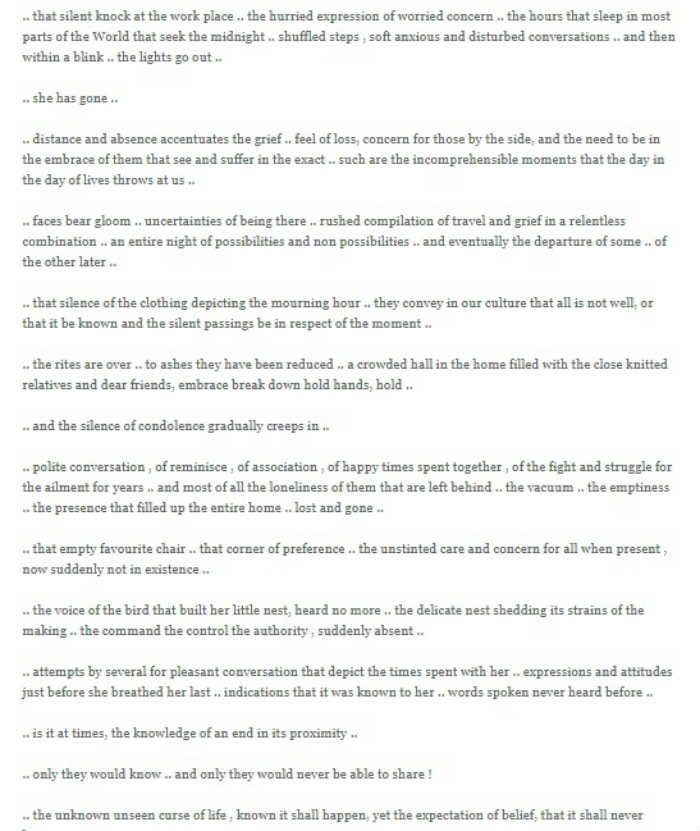 Later, in another post, he shared a letter that was written by a family friend to her daughter Shweta Nanda in an attempt to comfort her and share good memories of her mother-in-law. The letter mentioned how Jaya Bachchan once paid a visit to the famous Shirdi temple and brought a sacred cloth for Ritu Nanda while she was admitted at a hospital in New York. It revealed that the actor travelled with the cloth and put it on Nanda’s chest while she was trying to recover. The letter read, “Years ago, when your mother-in-law was ailing, Jaya and I had gone to Shirdi; it was the morning of JB’s birthday. Your mother emerged with a lovely orange cloth which she took with her to New York and lay over mother-in-law’s chest while she had been in the hospital. I believe your mother’s prayers have held her in excellent stead.” (sic). Check out the full post here: 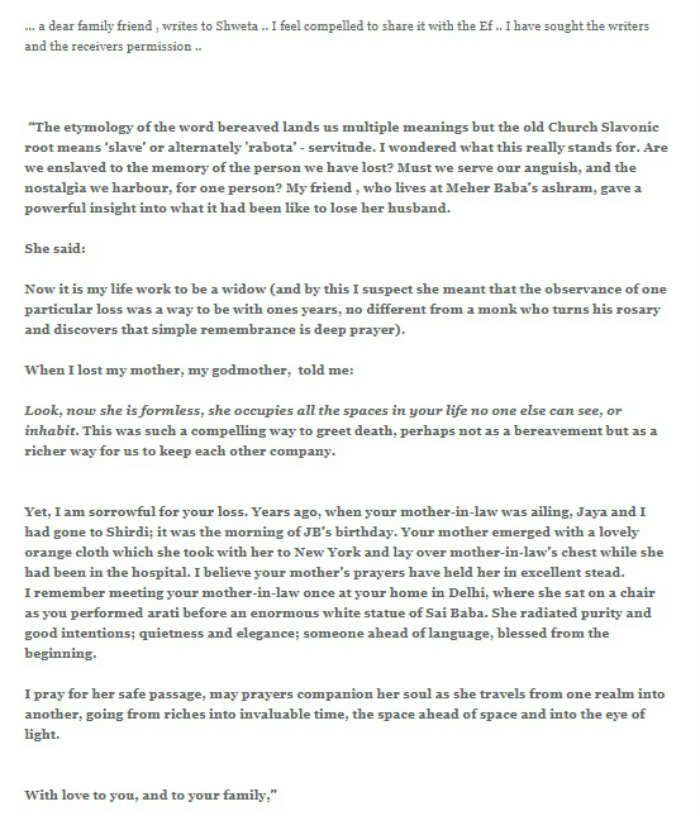 Ritu Nanda was suffering from cancer for a long time and even though she had gone through treatment abroad, she succumbed to the deadly ailment. Her funeral took place at Delhi’s Lodhi Road crematorium. May her soul rest in peace!