Big B tweeted to Taapsee, congratulating her on the trailer launch of Mulk.

Taapsee Pannu who was in town for the trailer launch for her upcoming Anubhav Sinha film, Mulk has been tremendously busy with almost four films being shot back to back. The Pink actress, who is traveling back to Scotland to continue shooting for Sujoy Ghosh’s thriller Badla, which also stars Amitabh Bachchan has most certainly managed to impress the Shahenshah of Bollywood by the sheer number of films she is doing this year.

Big B tweeted to Taapsee, congratulating her on the trailer launch of Mulk and sending his wishes her way, but her Pink co-star also teased the Naam Shabana actress for doing so many films in a year.

The veteran actor, who is quite social media savvy and has been known to be partial to Twitter extensively, tweeted to Taapsee after watching the trailer of the courtroom drama, which is slated for release on 3rd August. Taapsee took the comment in her stride and joked back asking him to do a couple of more films together.

Take a look at their tweets: 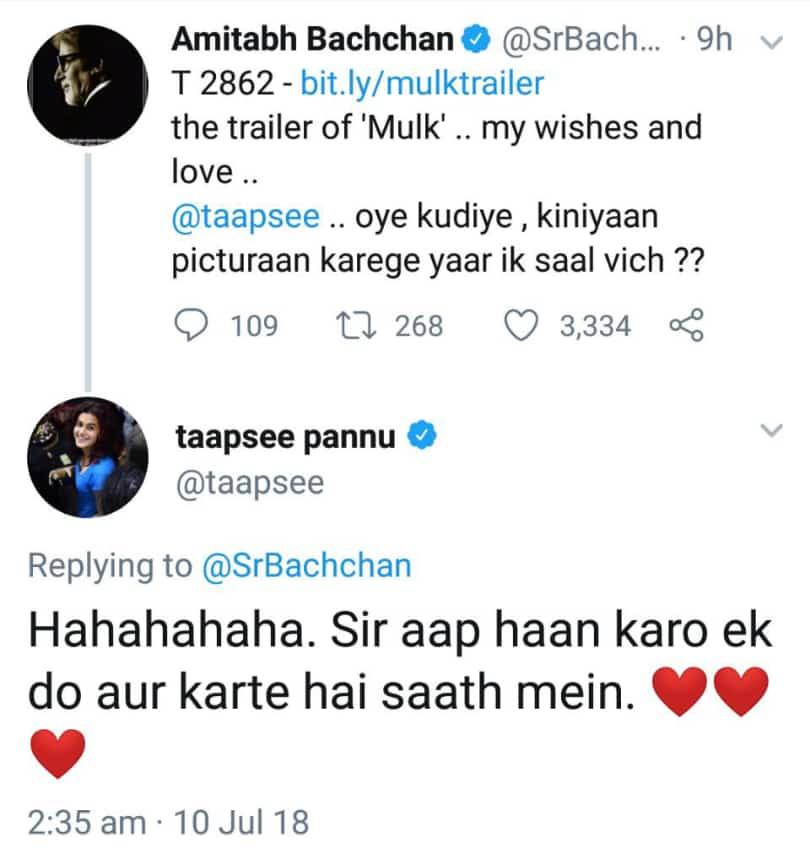 Mulk’s trailer has piqued audience attention with its gripping subject. Rishi plays an aging Muslim gentleman whose patriotism is questioned after his family member was found guilty of a terror act. The family is, of course, caught in a hopeless situation—on the one hand, it is trying to bring back their child from the clutches of fundamentalist forces and, on the other, they are almost broken under the pressure of an unyielding state.