Ananya Panday and BFF Shanaya Kapoor’s epic banter over ‘mood’ in her latest photos will leave you in splits.

That Bollywood’s new heartthrob Ananya Panday and Sanjay Kapoor’s daughter Shanaya share a BFF equation is known to many in the industry. It seems like Shanaya knows Ananya’s moods only too well. Recently, Ananya took to Instagram and posted a string of pictures of herself in a little red dress. Seen slaying in a hot red dress with minimal makeup, Ananya posed in a sultry manner for the camera.

Buddy Shanaya Kapoor was in the mood for some banter, evident from the comment she dropped on Ananya’s post. She captioned the post, “left u on red 🌶”. In this post, Ananya’s best friend and Sanjay Kapoor’s daughter Shanaya Kapoor commented, “Should I just post all? #mood”, jokingly asking if she should share several images. Ananya replied with a cryptic comment: “forever mood”. 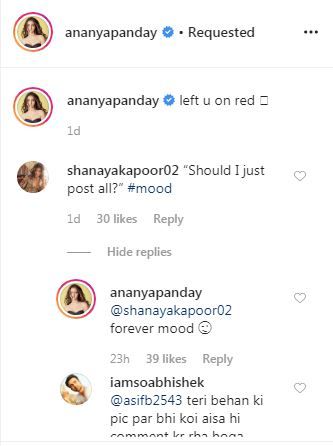 On the work front, Ananya is currently busy shooting for her next film “Khaali Peeli”, co-starring Ishaan Khatter. On the other hand, Shanaya has served as assistant director on cousin Janhvi Kapoor’s upcoming movie “The Kargil Girl”, and is gearing up for a Bollywood launch as a heroine in the future.

Shanaya Kapoor has not yet forayed as an actor in Bollywood but has taken the first step in the industry by being an assistant director for the biopic of IAF pilot Gunjan Sexana titled The Kargil Girl. The film stars Janhvi Kapoor in the lead role. We just hope Shanaya to be in front of the camera someday, but she chose to start her Bollywood journey on a slightly unconventional note for a star kid.