Bigg Boss 13 is a month away from its grand finale but there is already a split between close friends Sidharth Shukla and Asim Riaz. Initially, the two maintained a steady friendship but after a month, the two became enemies and are always seen screaming at each other during a fight. In today’s episode, Bigg Boss announced ‘Luxury Budget’ task where the housemates were divided into two teams- Team A Sidharth, Paras, Shehnaz, Aarti and Shefali Jariwala and Team B – Vishal, Asim, Rashami, Mahira and Shefali Bagga while Madhurima is the ‘Sanchalak’.

During the task, Sidharth Shukla and Asim Riaz again started fighting after the actor calls him a ‘cry baby’. Asim tells about Sidharth’s late father and then it goes to another level. Then, things went ugly and Asim blamed Sidharth that he went into his family. Shehnaz and Arti yell at Asim and made them understand that don’t go on the family. Arti shouts at Asim and tells that he has to stop going into the family.

After the video went viral on Color’s social media account, people, fans, and other forms of media started portraying Asim in a negative way for speaking something in the heat of the moment, and then later, fans of Asim Riaz have taken to social media to stand up for him as they trend #StopPortrayingAsimNegative on Twitter: 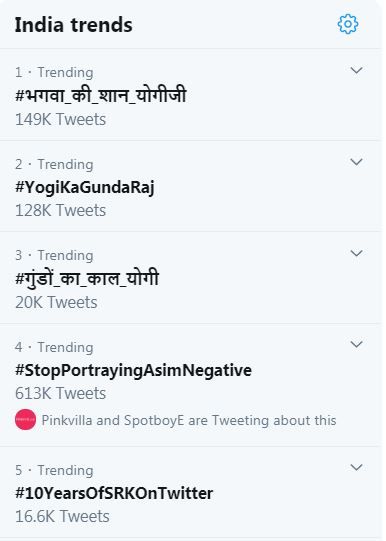 Today Shukkla not only abused & tried to get physical with #AsimRiaz

In today’s whole episode @imrealasim was playing sincerely, but opposition were full of gandagi and in promo @BiggBoss shows him negative #StopPortrayingAsimNegative

Meanwhile, the weekly luxury budget task had to be cancelled reportedly due to a fight between Vishal Aditya Singh and Shefali Jariwala.