Ranveer Singh once again emerged too cool to not be our ‘Entertainer of the Year’ and his cheesy antics at the recent Star Screen Awards are proof!

Honouring the best performances of the year, the Star Screen Awards 2019 recently took place in Mumbai and taking home two trophies was Gully Boy star, Ranveer Singh. Living up to his award of being the “Entertainer of the Year,” Ranveer’s off on and off-stage camaraderies with Bollywood celebrities or simply himself are too hilarious to miss, making us never take the actor seriously.

Beginning with the red carpet, Ranveer was seen planting a kiss on the cheek of his Padmavat co-star, Shahid Kapoor. The video currently going viral shows Shahid getting caught off-guard and left as surprised as the shutterbugs who clicked away in a frenzy.

Holding the limelight, Ranveer was then joined by Gully Boy co-star MC Sher aka Siddhant Chaturvedi. From what we can make out from the video, the duo planned a surprise for the cameras as Ranveer suddenly jumped into Siddhant’s ready arms and the latter even pretended to flung him into the air amidst much cheer from the media persons recording them.

Ranveer, because he is the most energetic actor there is, showed his own swag and entertained the crowd. He picked a camera with a tripod and posed with it. He was even seen shaking a leg to Simmba’s foot-tapping number, Aankh Maarey with cop drama co-star Sara Ali Khan. Acting like a perfect sport, Sara not only matched Ranveer’s steps but also exchanged friendly kisses before moving on to her seat. 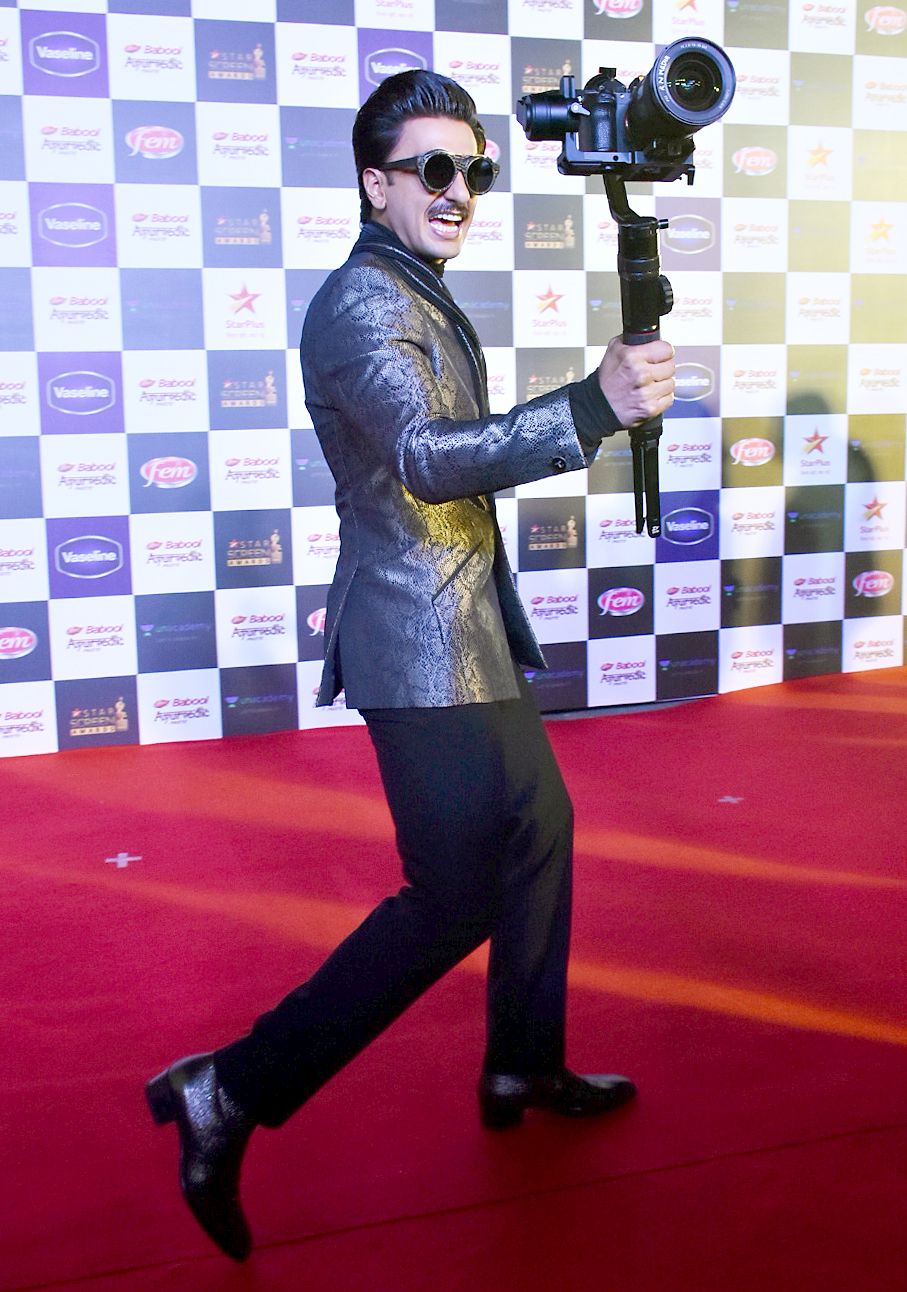 On the stage, Ranveer almost doubled down as he received the award from Rekha. Though obviously in awe of receiving the award from the legendary star, the way Ranveer expressed his excitement before Rekha was too funny and funky to let slip by.

Taking to his Instagram handle later, Ranveer posted a picture of himself with the two awards won at the gala night – Best Actor in a Leading Role for Gully Boy and the well-deserved Entertainer of the Year. While the other winning actors chose to pose a cliche picture of themselves kissing the trophy, Ranveer posted a picture with the killer expression that seemed to say “Hayeee” in a surreal manner and fans were surely left in splits.

Gosh! 😍 Double Whammy! 🏆🏆 ‘Best Actor in a Leading Role’ for #GullyBoy & ‘Entertainer of the Year’ at the #StarScreenAwards

On the professional front, Ranveer will be seen in a cameo with Ajay Devgn and Akshay Kumar in Rohit Shetty’s Sooryavanshi. Ranveer has wrapped up the London schedule of Kabir Khan’s ’83 which traces India’s historic victory at the 1983 cricket World Cup.

Apart from this, Ranveer also has Karan Johar’s Takht in his kitty and Jayeshbhai Jordaar. Directed and written by newcomer Divyang Thakkar, the film has Ranveer playing the titular Gujarati character.