Mehr Jesia's friend allegedly reveals how she reacted to the news of the pregnancy of Arjun Rampal's girlfriend, Gabrielle Demetriades. She says Mehr knew Arjun had moved on long back.

Actor Arjun Rampal’s estranged wife, Mehr Jesia is reportedly dealing well with the pregnancy news of Gabrielle Demetriades. Arjun recently announced on Instagram that he is expecting his first child with girlfriend Gabrielle and the news broke the internet. Now, as revealed by one of Mehr’s close friends to a daily, the former supermodel is fine with the news and she is busy settling down the finances before she officially gets a divorce with Arjun. A report in Mumbai Mirror suggests that Mehr knew way back that Arjun had moved on in life and this news doesn’t affect her at all.

The daily quoted a friend of Mehr saying, “They are still working out the financial terms of the separation. Mehr is a wonderful mother and wants to do what works best for her children.” The mother of two daughters had earlier released an official statement with Arjun announcing their mutual separation and added that they would continue to be friends treating their kids as their priority always.

Arjun posted a beautiful picture of himself posing with Gabrielle on Instagram and broke the news of her pregnancy in the caption. He could be seen lovingly holding the girl’s face as she wore a stunning gown flaunting her baby bump. The caption on Arjun’s post read, “Blessed to have you and start all over again….thank you baby for this baby 👶🏽” (sic)

Blessed to have you and start all over again….thank you baby for this baby 👶🏽

Only yesterday, the actor took his two young daughters Mahikaa and Myra on an outing. The three of them posed for the paparazzi. Their happy pictures seemed to have revealed that the father-daughter bond is as intact as it was before the news of the arrival of the baby. Check out these pictures: 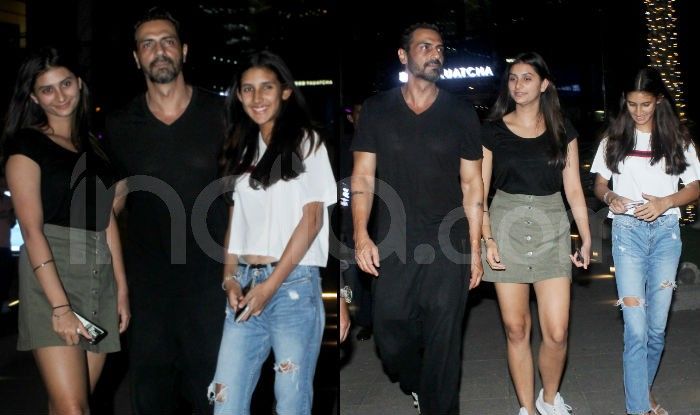 It was in May last year that Arjun and Mehr revealed their 20-years of marriage has hit the rock bottom. They released an official statement that read, “After a 20-year-long beautiful journey filled with love and beautiful memories, we would like to share, that all journeys have different paths. We feel that it is time for us to move on to different destinations henceforth.

We have always been solid when it has come to us, we will continue to be solid for each other and our loved ones, as we embark upon a new journey.

Both of us being extremely private people feel strange to be making this statement, but such are the circumstances of our lives. Where the truth can get distorted and lost.

We are a family, our love for each other is forever intact and we shall always be there for one another and most importantly, for our children Mahikaa and Myra. We would, therefore, appreciate our privacy through this time. Thank all for their support. Relationships can end, but love lives on.

We won’t be commenting on this any further.”