Boney Kapoor was present with Janhvi and Khushi at the launch of Sridevi's wax statue at Madame Tussauds Singapore. While speaking at the event, he couldn't resist his tears that shows just how deep their love was.

Sridevi’s Wax Statue: Madame Tussauds Singapore finally unveiled the much-awaited wax statue of late actor Sridevi in the presence of her family members – husband Boney Kapoor, daughters Janhvi–Khushi, her sister Srilatha and other close-ones. A video that’s currently going viral shows Boney Kapoor speaking at the event where he couldn’t resist tearing up and one can hear an evident break in his voice as he goes on to describe what his wife meant to him and how emotional is this moment when the family can see her being immortalised through a statue.

The Facebook page of Madame Tussauds Singapore went live at the event and recorded what everyone said about their beloved superstar Sridevi. The statue that was unveiled on Wednesday is the replica of the actor’s famous golden look from the song Hawa Hawai in Mr. India (1987). 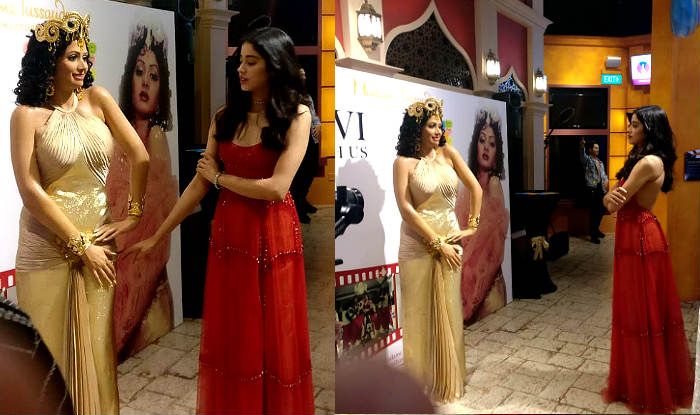 Earlier, Boney Kapoor shared a glimpse of the statue and wrote just how eagerly he was waiting for the world to see it. He tweeted, “Sridevi lives forever in not just our hearts but also in the hearts of millions of her fans. Eagerly waiting to watch the unveiling of her figure at Madam Tussauds, Singapore on September 4, 2019. #SrideviLivesForever” (sic)

Sridevi lives forever in not just our hearts but also in the hearts of millions of her fans. Eagerly waiting to watch the unveiling of her figure at Madam Tussauds, Singapore on September 4, 2019. #SrideviLivesForever pic.twitter.com/AxxHUgYnzt

As a tribute to the actor, the museum had also collected various fans’ messages from all across the world and displayed them on a tribute-wall at the event. Check out these pictures from the event:

I could practically hear the heartbreak in #boneykapoor ‘s voice. Such tremendous love he had for #Sridevi ❤️ pic.twitter.com/5lnXrTvUj4

Sridevi passed away after an accidental drowning in February last year. She had gone to Dubai for a family wedding when she was found dead in the bathroom of her hotel room. Sridevi’s untimely death left a never-to-be-filled void in the lives of her loved ones and her fans.