Coolie No.1: Sara Ali Khan-Varun Dhawan Flaunt ‘Masterji’ Ganesh Acharya’s Power as They Get Ready to Recreate His ‘First Hit’

Sara Ali Khan-Varun Dhawan look like a power-jodi as they pose with choreographer Ganesh Acharya ahead of dance rehearsal for Coolie No. 1

The lead actors are back from Bangkok where the shoot for David Dhawan’s Coolie No. 1 was taking place and giving fans recent update on the work front in India, Varun Dhawan shared a picture with co-star Sara Ali Khan and choreographer Ganesh Acharya which will surely brighten up their day. Posting it ahead of a dance rehearsal for the upcoming movie, Varun instantly set fans speculating about the song.

Taking to his Instagram handle, Varun shared the picture where he can be seen twinning with Sara in yellow and black attire, posing a ‘namaste’ while Ganesh happily stood between the two in the backdrop of a rehearsal room. The picture was captioned, “MASTERJI @ganeshacharyaa who choreographed is and OG of coolie
@saraalikhan95 #coolieno1 (Sara ji ने मेरे वस्त्र के रंग को copy किया।) (sic).” Quick to comment, Ganesh wrote, “@varundvn it was my first hit film n I’m looking forward to recreate it. Good luck to you and @saraalikhan95 (sic).” 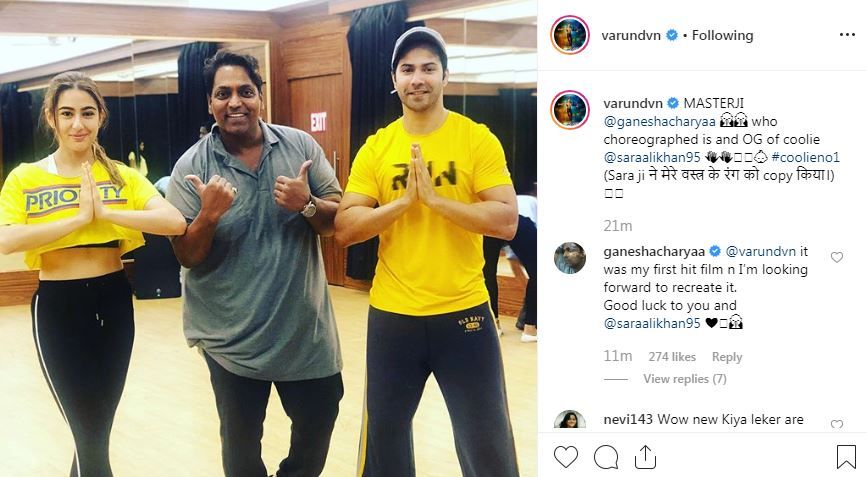 David Dhawan’s 45th film ‘Coolie No. 1’ starring Varun and Sara had in Bangkok, earlier this month. The first official posters of the remake of 1995 comedy film Coolie No. 1 were released by the makers and no doubt Varun and Sara looked promising.

In one of the posters, Varun can be seen dressed in the iconic Coolie uniform. He wears a red shirt with white trousers and a coolie cap giving funny expressions. On the other hand, Sara looked sizzling hot as she posed in a bling dress.

Varun Dhawan and Sara Ali Khan seem to be the perfect combination of glamour and quirk in the poster. Varun’s mother Lali Dhawan was the one who gave the clap for the first shot of the film. Also starring actor Jackky Bhagnani, Coolie No. 1 will hit the cinema screens on May 1, 2020.