Farhan Akhtar Finds THIS Treasure in Pool And Hrithik Roshan Doubles Down in Laughter!

His fans can vouch for his captions being rid with humour and filmmaker-actor Farhan Akhtar recently charmed them with his use of wit again as he shared a visual from his recent funtime at the pool. The Sky is Pink star was seen beating the heat with his daughter Akira and the viral video is proof of his skills as a doting dad.

In the video that Farhan shared on his Instagram handle, the actor can be seen waiting for some treasure to pop up from under the ripples of the pool water. Standing inside the shallow end of the crystal blue pool, Farhan gives a surprise expression when the treasure lands in his open arms. The boomerang video was captioned, “Look what I found #treasure #akistagram #kohsamui @small.akhtar (sic)” which made Hrithik Roshan comment, “Hahahaha faaab (sic)” and actor Karan Tacker exclaimed, “Lol!” 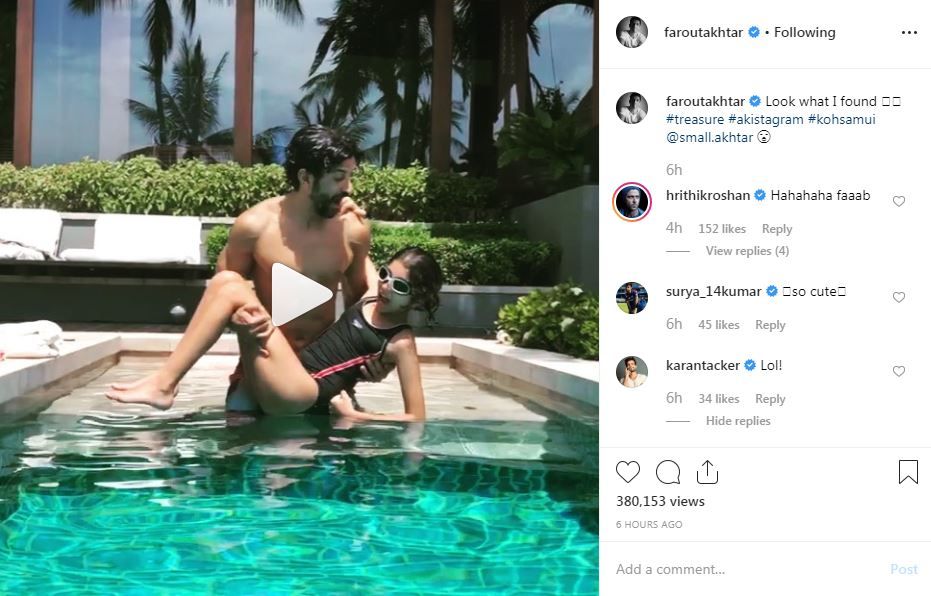 On the professional front, Farhan Akhtar recently wrapped up the shooting of The Sky is Pink and immediately started working on his next film Toofan. He is working really hard for his role and his Instagram photos say it all. The actor has been rigorously practicing boxing. In Toofan, Farhan will be again be seen playing the role of a sportsperson, this time, a boxer.

Meanwhile, Farhan will next be seen in The Sky is Pink with Priyanka Chopra and Zaira Wasim. In an earlier interview with Times Now, Farhan shared his experience on working with Priyanka and said that nothing has changed. He said, “Nothing has changed since the time when we were working together on Don (2006). I don’t think she ever felt I was the producer. We were friends. When working on The Sky is Pink, it’s the same feeling, that we are friends who are teaming up”.

The team of The Sky is Pink recently wrapped up the shooting. Earlier, Farhan Akhtar took to Instagram to share a picture with Priyanka Chopra, Zaira Wasim, and the entire team and wrote, “Film wraps are happiest when they end on a song”.

Co-produced by Priyanka Chopra, Siddharth Roy Kapur and Ronnie Screwvala, The Sky Is Pink is slated to release on October 11.