In a recent story on his Instagram handle, Farhan shared a picture with his lady love from Lake Fashion Week

The month of love has begun and is already striking down couples with heart-pointed arrows. Bollywood’s latest couple, Farhan Akhtar and Shibani Dandekar, who recently shed all shyness from displaying affection for each other, are busy giving relationship goals as they set the internet on fire with their PDA game.

In a recent story on his Instagram handle, Farhan shared a picture with his lady love from Lake Fashion Week but more than the adorable frame, it is the deep down romantic lines that penned with the image, which is making fans cry happy tears. While Farhan is seen in a muddy-brown tee, teamed with a black-coloured bandana, girlfriend Shibani is seen in a quirky designed white-coloured ensemble. Needless to say, both looked drop-dead gorgeous. Tagging Shibani in the story, Farhan captioned the picture as, “I don’t know if you find love or love finds you, either way it’s a gift from the universe. So be grateful. Every. Single. Day” (sic). 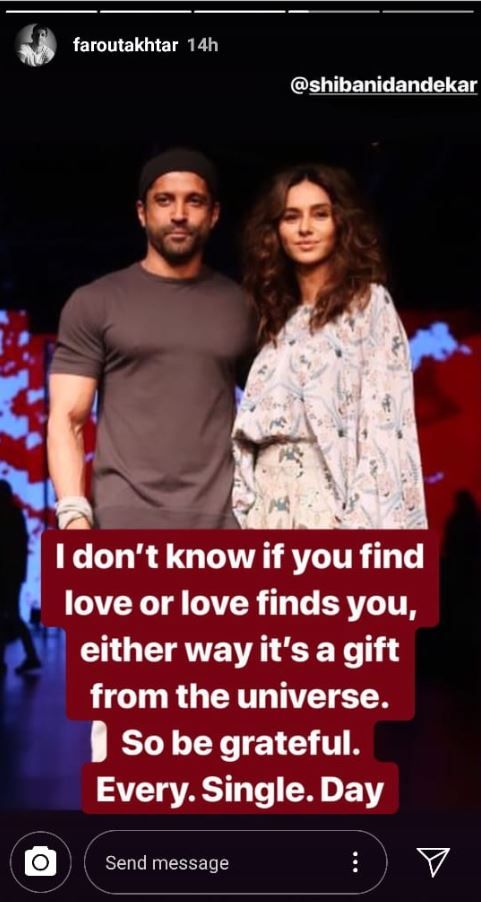 Farhan and Shibani recently attended Dabboo Ratnani’s annual celebrity calendar launch and kept the rumour mill running with the recent buzz that the two are all set to take their relationship to the next level soon. Reportedly, they are figuring out if they want to settle down by this year or early next year. according to Bollywoodlife.com, the duo has already exchanged the rings and are now engaged but Shibani and Farhan have not confirmed anything as of now.

On the professional, Farhan Akhtar and filmmaker Rakeysh Omprakash Mehra, who came together to deliver a blockbuster hit film Bhaag Milkha Bhaag, are reuniting once again after 6 years for the film titled Toofan. The lethal combination will be coming together for the film based on boxing. However, the film will not be a biopic but a fictional story.

Farhan is currently occupied with the work of his upcoming film, The Sky is Pink. The move also features Zaira Wasim and Priyanka Chopra in pivotal roles. The filmmaker is also rumoured to be soon making an announcement about Don 3, his much-awaited film.