Varun Dhawan and Alia Bhatt starrer Humpty Sharma Ki Dulhania clocked five years on Thursday. After Student of The Year, which was their debut film, director Shashank Khaitan gave Bollywood the jodi of the year. The on-screen couple, Alia Bhatt and Varun Dhawan took to Instagram and became nostalgic, recalling the shooting days.

Alia took to Instagram Stories and wrote, “Can’t believe it’s been five years. Best crew, best people and the beginning of the Dulhania journey. Too much love.” 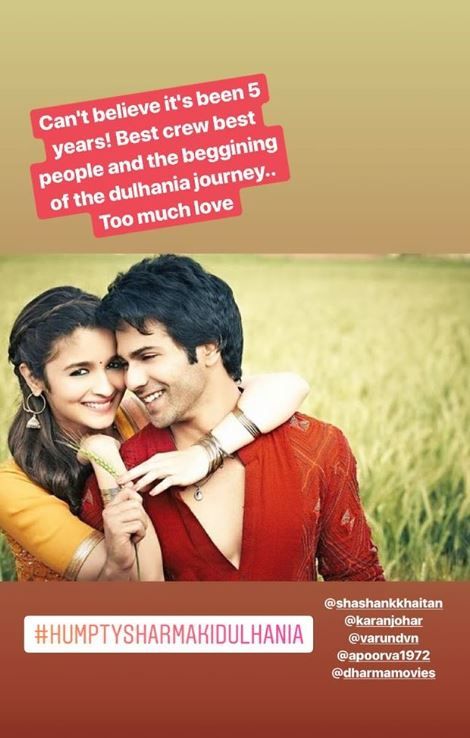 Reminiscing the journey, Varun shared he was nervous when the film was about to release. “Five years of ‘Humpty Sharma Ki Dulhania’. I remember how nervous I was when this film was releasing. Had the best,” Varun wrote on Instagram along with a photograph of himself carrying Alia on his shoulders.

#5YearsOfHSKD I remember how nervous I was when this film released. Had the best people around me thank u @aliaa08 @ShashankKhaitan @karanjohar and everyone around for taking care of me. P.s I don’t think I have calmed down pic.twitter.com/zU9Xu3a5KT

In a recent interview with entertainment portal Alia revealed, “Every time we work together, I have this separation anxiety that now maybe we won’t get a chance to collaborate. And then we are working together in next two weeks.”

On the other hand, Varun said, “We won’t be working together for some time now. That’s the way life has it. Her upcoming films (Brahmastra, RRR, Inshallah) and my next slate of projects (Coolie No 1, Street Dancer, Shashank Khaitan’s next), will take a lot of our individual time.”