As the clocks struck twelve, daddy’s girl and ace filmmaker Zoya Akhtar flooded the Internet with gush-worthy pictures of the birthday boy and “platinum poet”, Javed Akhtar. Flaunting her daddy turning “75 years young,” Zoya set fans pouring out their wishes and emptying their stash of love in the comments section.

Taking to her Instagram handle, Zoya shared two monochromic pictures of the Padma Sri lyricist-screenwriter. While one picture featured Javed in his boyhood, seated on a rock and posing in a dapper jacket and a pair of trousers, the other picture was from his initial days in the industry. Zoya captioned the childhood picture as, “Happy birthday Pa…75 today…You have only just begun (sic)” and punctuated it with a red heart emoji while the other one was captioned, “Platinum Poet #happybirthday #75yearsyoung #stayunstoppable #thankyouforeverything #loveyouforever #javedakhtar #myfather (sic).” 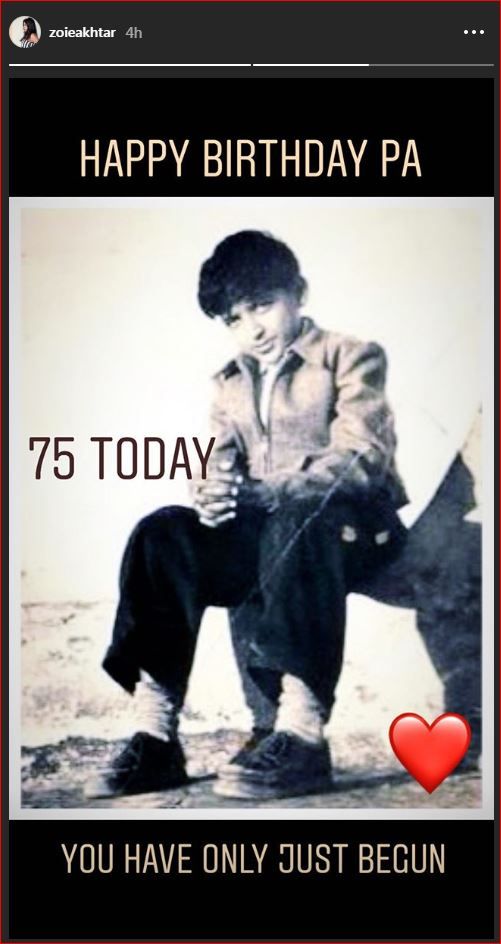 Noted lyricist and Urdu poet Javed Akhtar is a man who can win you for life with not just his words but also his humour and the art of shunning stereotypes. The Padma Shri (1999), Padma Bhushan (2007), the Sahitya Akademi Award, as well as five National Film Awards, are humble feathers to his success cap and despite his work as a scriptwriter, the lyrical maestro is remembered more for his poetic lyrics. The lyrics of his evergreen songs never fail to leave a lasting impression on our minds.