Deepika Padukone posts the picture of the gift she received from Rishi Kapoor and Neetu Kapoor in New York. The actor calls it 'blessings and good wishes.'

Actor Deepika Padukone recently paid a visit to Rishi Kapoor and Neetu Kapoor in New York and seems like she didn’t return empty-handed from there. The actor has posted the picture of the beautiful gift she received from the Kapoors on her way back. It’s a stunning bracelet, designed by Ranbir Kapoor‘s sister Riddhima Kapoor Sahni. Deepika wore the bracelet and put a picture of the same on her Instagram stories, thanking both Neetu and Riddhima for the present. While tagging the two Kapoor women, he wrote ‘blessings and good wishes’ on her picture. Check it out here: 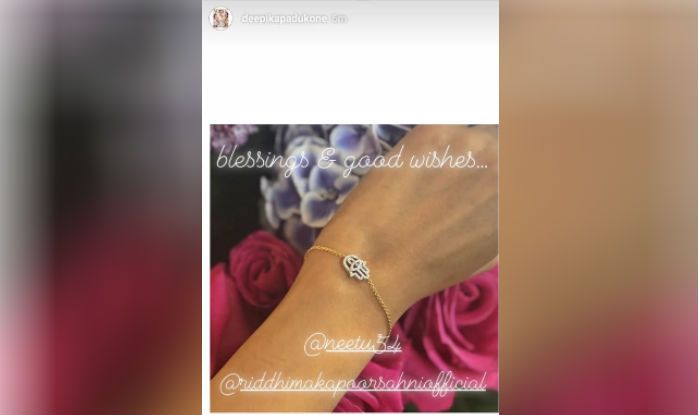 Earlier, Neetu Kapoor posted a few pictures of Deepika posing with her and Rishi Kapoor in New York. She called the actor ‘adorable’ in her post and mentioned that it was a fun evening. The caption on Neetu’s post read, “Such a fun evening with adorable @deepikapadukone .. gave lot of love n warmth 😍🥰” (sic)

Such a fun evening with adorable @deepikapadukone .. gave lot of love n warmth 😍🥰

Deepika, too, commented on Neetu’s post and thanked her for the ‘memorable evening’. She wrote, “Thank You both for such a fun,memorable evening!
To good health,happiness,peace of mind and many many more laughs…🍾🥂❤️” (sic)

Rishi Kapoor had been battling cancer in New York for the last nine months and recently, in his statement to the media, he announced that he has been declared cancer-free. The actor talked to Deccan Chronicle and revealed that he is on ‘remission’ now which means that he is cancer-free. The veteran actor thanked God, his family members and fans for their wishes and mentioned that the last eight months were very difficult for him. He was quoted by the daily saying, “My eighth month of treatment started on May 1 in the US. But God has been kind! I am in remission, meaning now I am cancer-free. Neetu has stood by me like a rock. Otherwise, I am too difficult a person to handle as far as food and drink are concerned.”