Actor Irrfan Khan has been away from the movie business for long after he got diagnosed with cancer and moved to the US for his treatment. However, after around eight months of break, the actor was finally spotted at the Mumbai airport in the morning today, on March 9. While Irrfan’s face can’t be seen in the pictures, it’s not difficult to realise that it’s indeed him who has been clicked by the paparazzi. The latest pictures are bound to provide some relief to his fans who have been waiting to get a glimpse of the actor for a long time.

Dressed in a pink blazer, camouflage pants and a black hat, Irrfan kept walking after he saw the shutterbugs. Check out the pictures here: 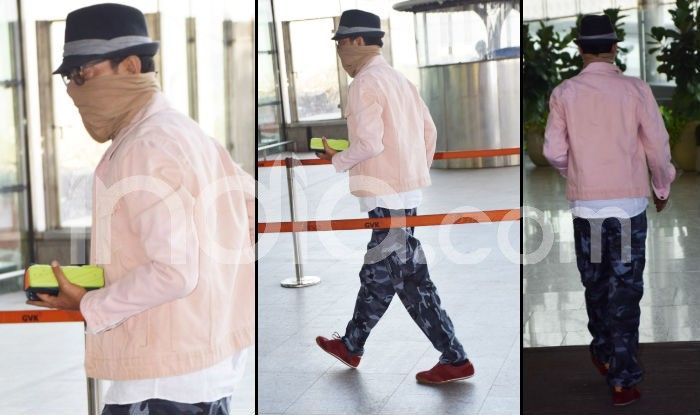 The actor hasn’t talked to the media about his health and when he is coming back to the movies. However, his closed ones say that he has been recuperating well and will soon make a comeback on-screen. In fact, his good friend and director Tigmanshu Dhulia recently talked about Irrfan working on Hindi Medium 2. While talking to a daily, he revealed that the actor is healthy and will soon start shooting for the sequel to the film which was released in the year 2017.

Tigmanshu was promoting his upcoming film Milan Talkies when he told Deccan Chronicle in an interview, “I did meet him after he returned to India. He is perfectly fine now. Irrfan told me that he will begin shooting for Hindi Medium franchise soon.” He also revealed that his team has been working on a script for Irrfan. He added, “We will do a film soon. Actually, we were in the process of writing one for him. Probably, if everything goes well, we shall be making the film soon.”

Irrfan announced in March last year that he has been diagnosed with a neuroendocrine tumour. The actor said that the support of his family, friends and well-wishers have given him new hope and he is ready to take the fight head-on with cancer. Since then, the actor has been getting treated for his illness in New York.