Kareena Kapoor Khan Spotted on a Coffee Date With Saif Ali Khan in London, But Where Is Taimur Ali Khan?

Kareena and Saif are seen enjoying cups of cappuccino

Kareena Kapoor Khan is currently in London with her boys Taimur Ali Khan and Saif Ali Khan. The actress left for her vacation last week. The actress currently enjoying the success of her last release Veere Di Wedding which released on June 1. So far, the film has earned close to Rs 70 crore at the box office. While the Pataudis are having a great time in London, we came across a new picture of Kareena and Saif on a coffee date during their vacay. But we wonder where Taimur is!

Bebo and Saif are seen enjoying cups of cappuccino with fruit tarts and scones at a cafe in Windsor. The actress looks stunning in her latest picture in a hat and a blue outfit while Saif looks really handsome in a white shirt that he teamed with blue pants. Over the weekend, we came across a picture of Kareena, Saif and Taimur on a stroll in London. Sr Pataudi was seen with Taimur in a pram while the Veere Di Wedding actress walked with them. Take a look at the recent pic of the couple from their coffee date below: 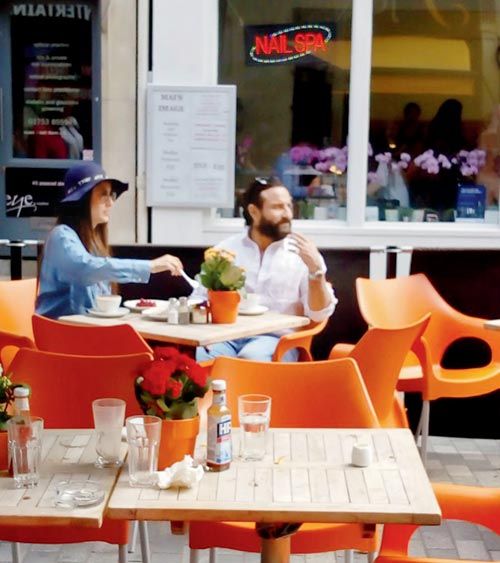 Kareena recently revealed that she will do one film at a time so she and Saif can balance time for Taimur. She was quoted saying, “My husband isn’t a businessman who comes home at 6 pm. He is an actor too, and between us, we must balance our time out for Taimur. We have decided we’ll do one film each – I did Veere Di Wedding, now he is doing Navdeep’s [Singh] film. After he finishes his commitments by November, I will start my next. So, I can kick it off in January.”