Refusing to slowdown at the box office, Muddassir Aziz-directorial Pati Patni Aur Woh is already set to enter the Rs 50 crore club on day 6 of its release and lead stars Ananya Panday and Kartik Aaryan are doing all they could to keep fans hyped up to go watch their rom-com in the theatres. Recently, Ananya found a fan-support in her actor-father Chunky Panday and Kartik couldn’t help but term them as the “cutest Chintu Tyagi’s”.

Taking to her Instagram, Ananya shared a video where she can be seen holding a mask and trying out the Chintu Tyagi filter on the photo-sharing app, first on her face, then on Chunky’s who popped out and back in from behind her while Aankhiyon Se Goli Maarey played in the backdrop. Ananya captioned the video, “will the real Chintu Tyagi (and @chunkypanday) pls stand up #PatiPatniAurWoh in theatres now!! Go book ur tickets and try out the ‘Chintu Tyagi’ filter (sic).”

Impressed, Kartik reposted the video on his Instagram handle and captioned it, “WOHHHH !!! Cutest #ChintuTyagi s and i yam not Joking (sic).”

will the real Chintu Tyagi (and @chunkypanday) pls stand up 🤪🙋🏻‍♀️ #PatiPatniAurWoh in theatres now!! ❤️ Go book ur tickets and try out the ‘Chintu Tyagi’ filter 🤩 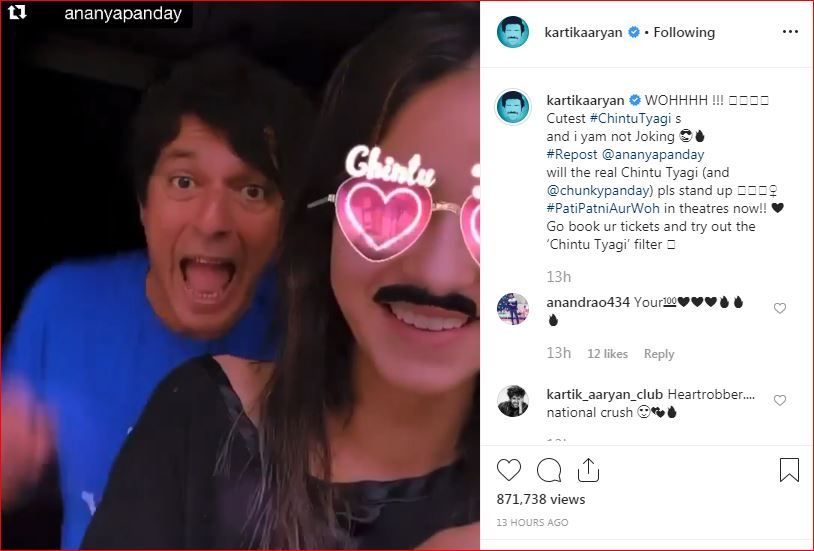 Pati Patni Aur Woh is a romantic comedy film produced by Renu Ravi Chopra. It is a remake of the 1978 marital comedy Pati Patni Aur Woh. In the new version of the film, Kartik plays the role of Abhinav Tyagi AKA Chintu Tyagi who is not a usual confident casanova but an IIT topper and a government employee.

Bhumi plays the role of Vedika, who is a modern-day independent and confident woman, who doesn’t shy away from telling her prospective partner that she likes sex. Ananya Pandey plays the role of Tapasya Singh, a fashion designer from Delhi who wants to set up a leather products manufacturing unit in Kanpur.

Directed by Muddassir Aziz, Pati Patni Aur Woh also has cameos by Kriti Sanon and Sunny Singh. While Kriti had teamed up with Kartik in Luka Chuppi that released early this year, Sunny has worked with Kartik in the Pyaar Ka Punchnama-series and in Sonu Ke Titu Ki Sweety that released last year.