Priyanka Chopra Jumps Back to Work Right After Tying The Knot With Nick Jonas, Attends Event in Delhi; See Pictures

Priyanka Chopra and Nick Jonas who recently tied the knot at Udaipur’s Umaid Bhawan Palace are the current talks of the town. Another Bollywood couple who recently tied the knot is Deepika Padukone and Ranveer Singh. While Priyanka and Nick decided on getting married in India, Deepika and Ranveer exchanged vows in Italy. This year has been all about celebrity weddings with Sonam Kapoor and Anand Ahuja, PeeCee and Nick, and DeepVeer. After Priyanka and Nick’s wedding, the couple was spotted at the Delhi airport.

PeeCee and Nick’s reception was held yesterday December 4 at The Taj Palace Hotel where Prime Minister Narendra Modi was also spotted blessing the couple. Earlier today, the couple was seen attending an event for a company in Delhi. The newly wedded bride donned a peach Ralph and Russo dress. With soft curls and fresh face makeup, PeeCee looked stunning as always.  Nick, on the other hand, looked dapper in a grey suit which he teamed it with a blue tee. 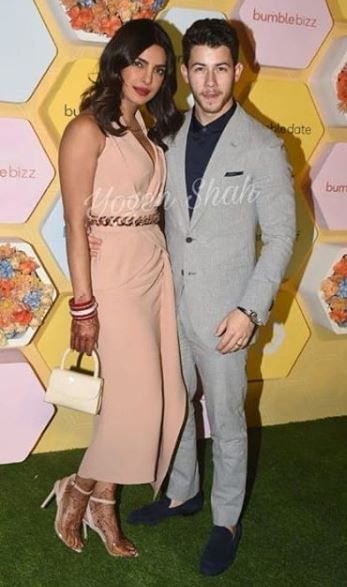 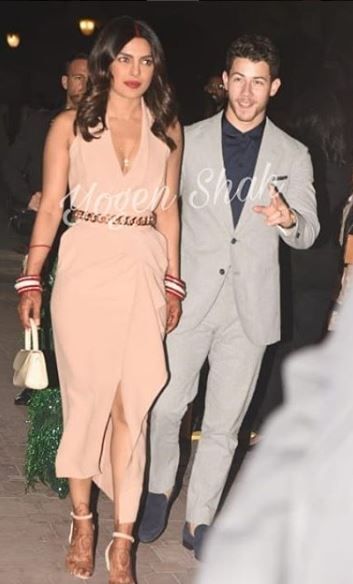 The couple got married in two ceremonies – Christian and Hindu. For their Christian wedding, the couple twinned in Ralph Lauren and for the Hindu wedding, both Nick and PeeCee donned Sabyasachi Mukherjee custom-made outfits. Undoubtedly, the bride looked dropped dead gorgeous in both the outfits. The most unique part of her wedding gown was her 75-foot long veil. That was the most highlighted part of her whole look. The Christian wedding was held on December 1 while the Hindu wedding was held on December 2.