Ranveer Singh-Sunil Gavaskar Can't Stop Gushing About Kapil Dev's 'Legendary 175 Against Zimbabwe' Which Failed to Get Recorded by BBC And THESE Videos Are Proof!

With the Kabir Khan directorial ’83 going on the floors at Lord’s Stadium in London, lead actor Ranveer Singh is maintaining all the hype around his upcoming movie as he keeps on sharing latest updates and fun facts related to the drama or its members. In the latest string of information, Ranveer was seen gushing over former Indian team’s cricket captain Kapil Dev‘s “legendary 175” runs in a World Cup match against Zimbabwe, back in 1983 and how the BBC broadcast failed to cover it back then.

Ranveer first uploaded an old picture of Kapil from the grounds in monochrome and captioned it, “On this day, 36 years ago, Kapil Dev walked in at 9 for 4 and made cricketing history. The legendary 175* against Zimbabwe at Tunbridge Wells in the 1983 World Cup is an innings that truly stands the test of time. Perhaps, the greatest innings EVER” (sic). Next Ranveer gave a glimpse into Sunil Gavaskar’s interview where the former cricketer gushes about Kapil’s mettle in the game. The videos were captioned, “Legendary Gavaskar on the 175*” (sic) and “The BBC was on strike that day. It never got recorded. Watch it recreated in reel @83thefilm !” (sic).

Check the picture and videos by Ranveer Singh here: 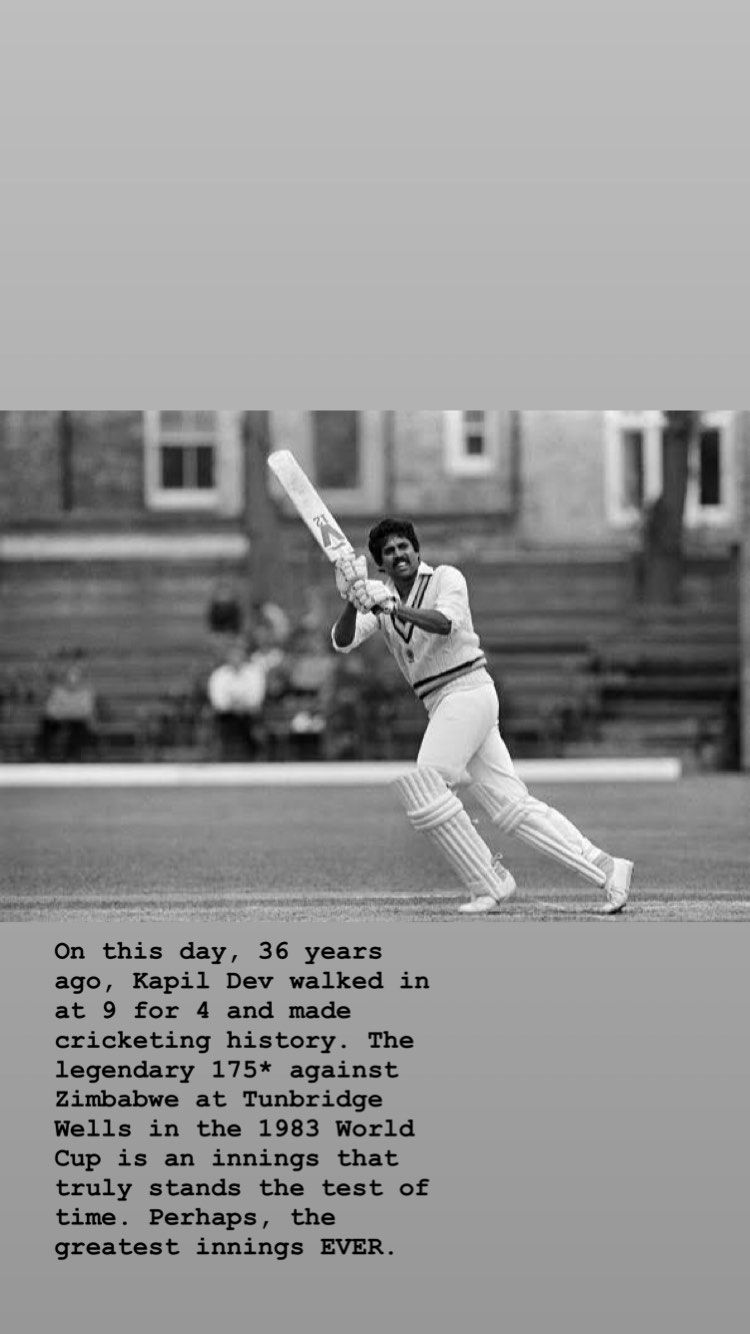 While Ranveer turned commentator during the recently concluded India VS Pakistan match, on the professional front, he is in London, shooting for the upcoming Kabir Khan directorial, ’83. One of the most anticipated films of next year, the film tells the journey of Indian Cricket team’s first World Cup win of 1983 under the leadership of Kapil Dev. While Ranveer plays the lead and Deepika plays his on-screen wife, the makers have roped in many other prominent faces to essay the roles of other cricketers from the squad. Saqib Saleem, Ammy Virk, Hardy Sandhu, Jiiva, Pankaj Tripathi, Jatin Sarna, Chirag Patil, and Tahir Raj Bhasin among others are a part of the film.