Shraddha Kapoor Crooning to 'Tum Hi Ho' in THIS Viral Video Takes Internet in a Storm, Garners Over 2.3 Million Views in Just 4 Hours as Aashiqui 2 Celebrates 6 Years of Release

Introducing us to the raw talent, not just in the arena of acting but also music, blockbuster Aashiqui 2 clocks six years today. Ensuring a career trajectory that would ride on hyperbole, the movie made actors Aditya Roy Kapoor and Shraddha Kapoor and singer Arijit Singh sensations in their respective genres in Bollywood. Celebrating 6 years of her debut movie, Shraddha took to her Instagram handle to not only celebrate the day but also changed her handle name to that of her character in the movie, Aarohi. 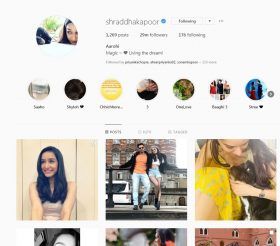 In the video that the actress shared, she can be seen slaying in a spagetti top with a no-makeup look as she crooned to the chartbuster hit, Tum Hi Ho. She captioned the video, “I am what I am because of you all #6YearsOfAashiqui2” (sic).

I am what I am because of you all ❤️ #6YearsOfAashiqui2

Needless to say, her melodious voice struck deep cords with the fans who not only watched it on repeat but also set it trending on social media. The video garnered over 2.3 million views in just 4 hours. Backing up her efforts, Shraddha’s brother Siddhant Kapoor commented on the video, “I still remember that weekend ! When all your hardwork, talent was appreciated and watched all over … so proud …” (sic) and smeared it with heart emojis. 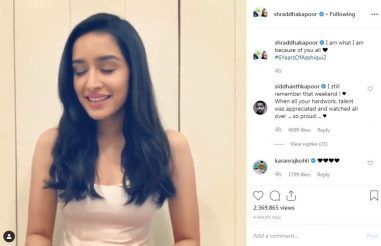 Recently, Bollywood grapevine has been abuzz with the rumours of actress Shraddha Kapoor getting married to photographer Rohan Shrestha this year. However, Shraddha’s father and veteran actor Shakti Kapoor calls the rumours nothing but ‘bulls**t’. He was approached by an entertainment portal to comment on the speculations about his daughter’s marriage. Shakti said that his daughter is only focusing on her work currently and there’s no truth to any rumours about her wedding.

On the work front, Shraddha is currently shooting with Sushant Singh Rajput for Nitesh Tiwari’s Chhichhore. She will also be seen with Varun Dhawan in Remo D’Souza’s directorial Street Dancer. The film’s shooting has already begun. Shraddha also had the Saina Nehwal biopic in the pipeline. However, she recently backed out of the project due to date issues. Now, Parineeti Chopra has stepped into her shoes. The official announcement regarding the change was made a few days back by T-Series’ Bhushan Kumar on social media.

Shraddha also has Remo D’souza’s film, Street Dancer 3D in her kitty which is bankrolled by Bhushan Kumar, Krishan Kumar and Lizelle D’Souza. The shooting of the film’s first schedule kickstarted on 23 January in Amritsar, Punjab after which the team headed to London to shoot for the second leg.