Arjun Kapoor's dig at Half Girlfriend co-star Shraddha Kapoor's smouldering red hot look from the sets of Saaho is typical of all friends ever!

Fans can wait no longer for Shraddha Kapoor–Prabhas action thriller Saaho to hit the cinema screens and amplifying their anticipation is the diva’s social media profile where her sultry pictures from the movie’s sets are raising the mercury regularly. Teasing fans to her hot and sexy pictures while shooting for the song Enni Soni, Shraddha smeared the Internet with her bold red looks from the lap of Innsbruck mountains and set everyone’s hearts aflutter.

In the shared pictures, Shraddha can be seen flaunting her well-toned legs in a flowy red gown with a plunging neckline with thigh-high slits. Accessorising her look with a pair of long tassel earrings, Shraddha wore black heels to complete the look which stood in bright contrast to the earthy tones in the backdrop. The pictures were captioned, “#EnniSoni #SAAHO styled by @leepakshiellawadi assisted by @snehagajula007 make up @shraddha.naik hair @rohan_jagtap_ @menonnikita #SaahoOn30thAugust (sic)”. Reacting on the picture which features Shraddha posing in a sultry manner in the midst of red smoke, Arjun Kapoor, her Half Girlfriend co-star wrote, “That’s a hectic sneeze reaction (sic)” and fans couldn’t help but double down with laughter. 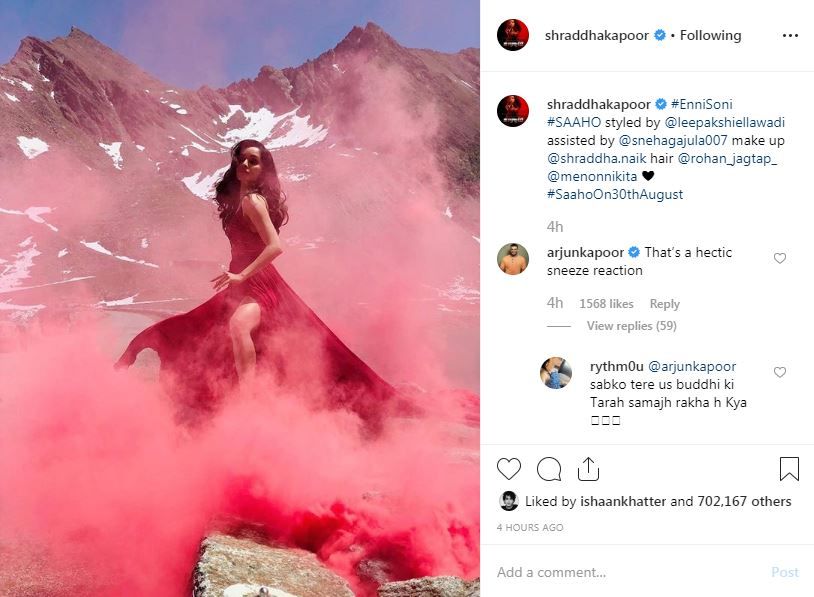 Talking about Saaho, the film offers a variety of spine-chilling action sequences, starting from Baahubali actor Prabhas standing at the edge of a tall building and firing bullets to performing stunts on the road on a speeding bike, which will surely keep the audiences glued to their seats.

Actors like Mahesh Manjrekar, Jackie Shroff, Neil Nitin Mukesh, Murli Sharma, and Chunky Panday will be seen in never-before-seen avatars. Shraddha and Prabhas will be seen sharing screen space for the first time in Saaho.

The film is being shot in Telugu, Tamil, and Hindi simultaneously at a number of stunning locations in and out of the country and is slated to hit the theatres on Independence Day(Aug 15) this year.