Deepika Padukone started voicing her opinion on the importance of mental health through her foundation The Live Love Laugh Foundation (TLLLF) in June 2015.

Adding another feather to her hat, Deepika Padukone won the 26th Annual Crystal Award for spreading awareness about the importance of mental health. “With more than 300 million people suffering from the illness, depression is the leading cause of ill health and disability in the world today and a major contributor to the overall global burden of disease. It is therefore increasingly clear that now more than ever before, we need to aggressively address what is an invisible and overlooked health and social burden,” said the actor who has been vocal about the issue for a long time.

Expressing her gratitude towards the award that she received, Padukone said, “I am humbled and deeply honoured to be chosen for this year’s Crystal Award and dedicate the award to the millions around the world who experience stress, anxiety and depression, and other forms of mental illness.”

Padukone started voicing her opinion on the importance of mental health through her foundation The Live Love Laugh Foundation (TLLLF) in June 2015. 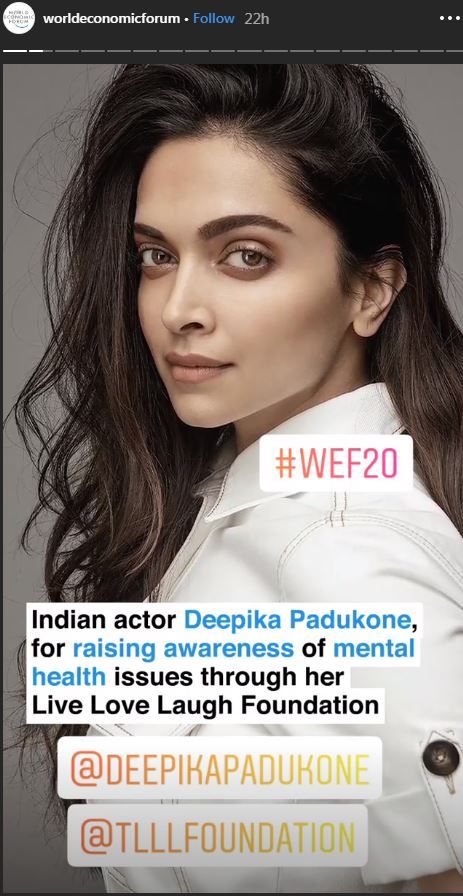 Through the program, the actor launches nationwide awareness as well as de-stigmatisation campaigns. The foundation raises awareness about mental adolescent mental health disorders and organises training sessions, research and lecture series that feature some of the most known thinkers and achievers.

On the front of work, Padukone will be seen in her next Chhapaak. Directed by Meghna Gulzar, the movie is based on the real-life acid attack survivor of Laxmi Agarwal, who was attacked allegedly by a spurned lover in 2005 at the age of 15.

Chhapaak is being co-produced by Deepika and Fox Star Studios and marks her production debut. The movie is set to hit theatres on January 10, 2020.