Kareena Kapoor Khan hosted a Christmas bash at her residence inviting her close group of friends and family members. Ranbir Kapoor had a plus one when he arrived with Alia Bhatt. The duo cut a beautiful picture together.

Actor Kareena Kapoor Khan hosted a Christmas party at her place and invited her family members to the do. Apart from Sara Ali Khan, Soha Ali Khan and other members of the family, the one who got the entire attention was Ranbir Kapoor. Kareena’s cousin had a plus one at the party as she arrived with his girlfriend Alia Bhatt. Even more exciting was the fact that for this rare time, the duo didn’t shy away from showing off their chemistry in front of the cameras.

Ranbir and Alia were seen in a jovial mood. The actor had his one arm wrapped around Alia’s shoulders and the duo looked totally comfortable in each other’s presence. They continue the same posture in front of the paparazzi and posed for the happy photos.

Sara Ali Khan looked hot in her white dress and so did Alia in her blue. The shimmer and white seemed the party theme as most of the guests either appeared dressed up in white or sparkles and shimmer. Looking striking in her one-shouldered white mini dress, Sara posed with her brother for the paparazzi. Joining the Kapoors and Pataudis were Bebo’s best pal Karan Johar, Amrita Arora with her husband Shakeel Ladak and Maheep Kapoor with husband Sanjay Kapoor and Seema Khan. Check out these pictures: 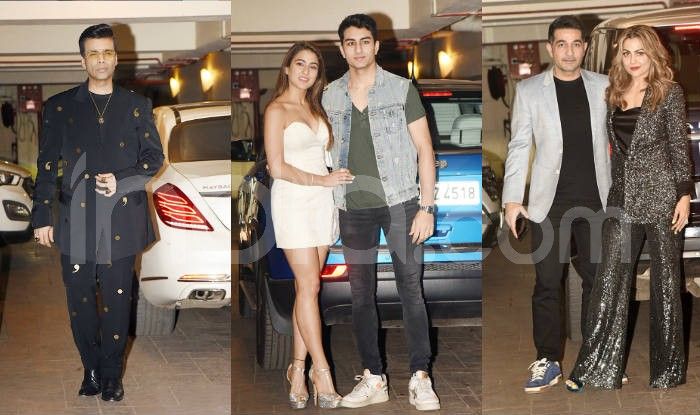 Malaika Arora and Natasha Poonawalla were two women who painted the party red with their stylish outfits. Malaika wore a lace suit while Natasha rocked a voluminous frick number. Impressed with Ranbir and Alia though?