Call her the superstar of Indian Cinema or the eternal beauty of Bollywood, Sridevi was truly an iconic personality. On late actor Sridevi’s 56th birth anniversary, daughter Janhvi Kapoor has wished her ‘mumma’ with a beautiful picture and words that prove how badly she’s missing her today.

A mother’s loss leaves a permanent vacuum in one’s life irrespective of what age you lose her. It’s been over a year and half to Sridevi’s sudden demise and Janhvi is not out from the pain. She keeps sharing tokens of her aching heart on her social media handle and the actor recently turned the Internet emotional with her latest post of late Sridevi. “Happy Birthday Mumma. I love you’, wrote Janhvi proving how badly she’s missing her mom.

Happy birthday Mumma, I love you

The lady superstar of the Hindi film industry was found dead in her bathroom at a hotel in Dubai on February 24. The reason for her death was identified as accidental drowning. Janhvi, her sister, Khushi Kapoor, and Boney Kapoor are still trying to deal with the loss. Their siblings – Arjun Kapoor and Anshula Kapoor, have been there with them like rocks, supporting them in all their endeavours – emotionally and professionally.

Priyanka Chopra, Manish Malhotra, Shanoo Sharma, Masaba Gupta are among many others who have sent love to Janhvi on her heartfelt post: 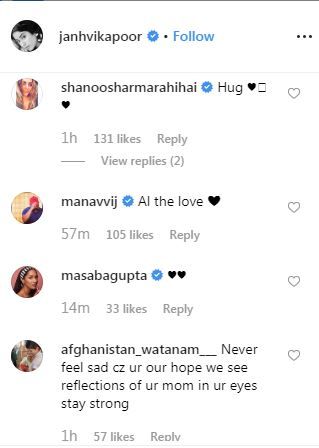 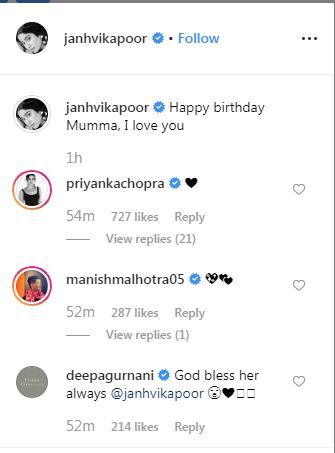 Last year on her birthday, an event was organised in the loving memory of Sridevi.

Fans poured in wishes for Sridevi over social media:

Remembering Sridevi ji on their 56th Birthday.. Happy Birthday to the only actress I adore the most😘 You are being missed everyday n every second.@SrideviBKapoor #SrideviLivesForever #HappyBirthdaySridevi pic.twitter.com/g95dbf2tJq

Happy Birthday, Sridevi. We miss you!