Kajol's birthday post for son Yug is too cute to miss. Watch the video here.

Kajol and Ajay Devgn’s son, Yug turned nine today and the momma of two has something very cute to show her fans and followers. To wish her little munchkin on his birthday, Kajol searched for an old and endearing video of Yug. It’s a throwback Dubsmash clip of Yug when he was 3.

Ajay and Kajol are pretty protective about their children but since it is Yug’s birthday, Kajol decided to show the world her love for her champ. She started with birthday countdown a week ago with adorable pictures and now this clip. In the video, Yug can be seen making a video and winking for a dialogue. Dressed in a white shirt, Yug looked lovely. In the background, we hear Kajol laughing out loud. She captioned the video with a heartfelt wish for the baby boy. “Awesome at 3 and even more awesome sauce at 9! HAPPY BIRTHDAY YUG! ( j think he hears me yelling even in his sleep)”, Kajol wrote.

Many Bollywood actors and friends of Kajol such as Tanishaa Mukerji, Niranjan Iyengar, Dia Mirza, Amrita Arora and Tara Sharma commented on the post and wished little Yug on his special day.

Take a look at the adorable video of Yug and Kajol:

Awesome at 3 and even more awesome sauce at 9! HAPPY BIRTHDAY YUG! ( j think he hears me yelling even in his sleep )

Here are the messages for Yug: 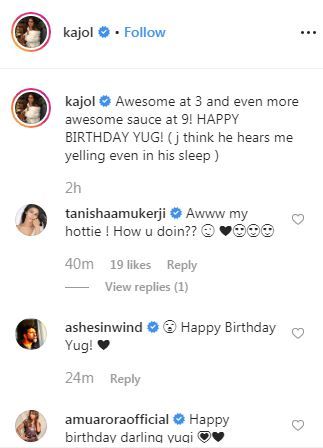 A few days ago, Kajol shared a birthday countdown picture with Yug:

On the work front, Kajol was last seen onscreen in Helicopter Eela which didn’t do well at the Box-Office. Talking about her upcoming projects, she said, “As of now, there is absolutely nothing so, maybe I will take a two years’ break, who knows? But yes, I am planning something. Hopefully, I will be able to announce it soon”.