Comedian and actor Kapil Sharma is getting married to his longtime girlfriend, Ginni Chatrath, in a Punjabi wedding ceremony, on December 12. The wedding is happening in Jalandhar, which is also the couple’s hometown. While Kapil is currently busy with the return of his The Kapil Sharma Show, pre-wedding celebrations have begun at Ginni’s place.

Right before she began the celebrations, Ginni gave a heartfelt interview to a daily and revealed a lot about her relationship with Kapil. In an interview with DNA, Ginni revealed that she had developed feelings for him from their college days in Punjab. She said, “I always knew he was the one; In fact, I was the one who fell in love with him. I would take home-made food (with some help from my mom) for him during college days”. She finds Kapil a hard working, witty, family man and also believes that he is someone who can never let any bad phase decide his future. She added, “Kapil has a strong will power; I always knew he will get over this, phase, too. He is strong, talented and hardworking and there is no way he would not be able to bounce back”. 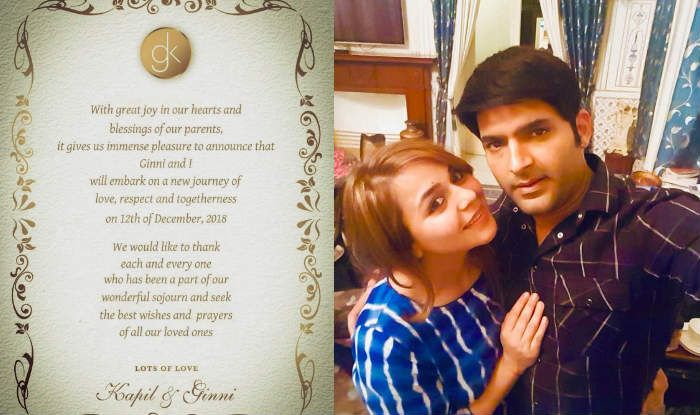 Ginni also revealed that they are not planning their honeymoon right after the wedding since Kapil has to work on his show. She said, “Kapil will resume shooting for the show immediately after the wedding and I’m okay with it, as this is the time for him to work hard and post that, we can have as many honeymoons as we want”.

Meanwhile, the photos of Ginni from the pre-wedding celebrations are flooding the internet. After a series of pictures from her  Akhand Path ceremony went viral on social media, a new set of photos from her bangle ceremony has taken over the internet. Dressed in a striking red embroidered sharara suit for the day, Ginni is looking all happy and glowing. If there’s one thing that’s clear from the photos that are surfacing, it’s the fact that this bride is not shying away from expressing her excitement. Look at this: