Popular Punjabi peppy track ‘Laung Laachi’ from the film Laung Laachi featuring Ammy Virk, Neeru Bajwa and Amberdeep Singh, has become the first Indian song to reach one billion views on YouTube. T-Series has done it again! After continuing to reign as the most viewed and the most subscribed YouTube Channel in the world for some time now, the music major has added another feather to its hat. Laung Laachi has catapulted itself into a unique position. It has garnered a lot of attention for its melody and obviously Niru Bajwa’s charm.

The song has been composed by Aman Jay, written by Harmanjit, with music by Gurmeet Singh and sung by Mannat Noor, the 2018 song has taken the Internet by storm. People have not only performed on the song but also have made covers, TikTok videos on it.

The song Laung Laachi is the festive track which highlights cute chemistry between Neeru and Ammy, sprinkling it with traditional Punjab de mitti di khushboo kinda romance. Running parallel to this, you also get to see a sweet-tender kind of affection between Neeru and Amberdeep in the song. 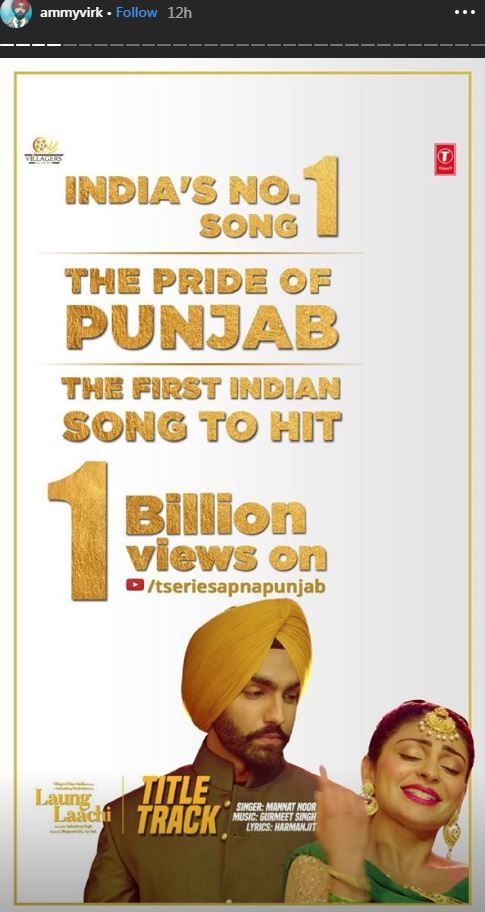 “It’s quite surreal! The song has been hugely appreciated and over one billion views is certainly a huge validation from music buffs. It has struck an emotional chord with viewers across the globe and we are extremely happy by the humongous success of the song,” said Bhushan Kumar, Chairman and managing director of T-Series, which released the music of “Laung Laachi”.

Gurmeet sees it as a huge achievement. “I’m feeling very proud to have composed the song. Hearty congratulations to everyone associated with the song, especially T-Series who has been an instrumental force for taking the song to this level and the viewers for making it a huge success.”