We have to say that this lady in red made an absolutely gorgeous blushing bride. 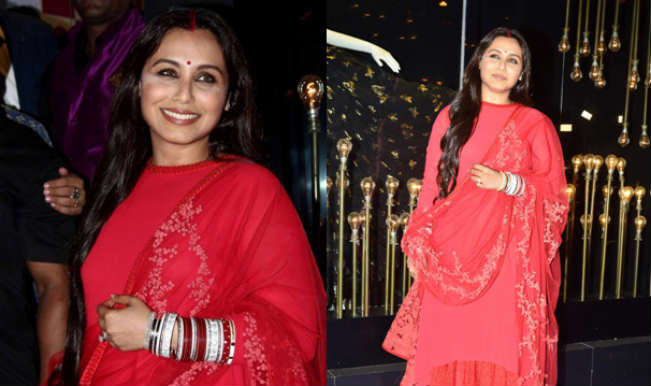 They say that newly-wed brides have a certain charm about them and it seems like Rani Mukerji is full of the charm. Rani Mukerji made her first appearance in a beautiful red Sabyasachi Mukherjee saree, as she attended the Diva’ni store launch in Mumbai on Thursday night. We have to say that this lady in red made an absolutely gorgeous blushing bride.

The actress was accompanied by her mother-in-law Pamela Chopra. Though, camera shy Aditya Chopra didn’t turn up for this event. Aditya Chopra has always been away from limelight but it seems sasu maa Pamela Chopra is quiet camera friendly. The new saas-bahu duo giggled and whispered to each other and seemed to have bonded pretty well.

Rani Mukerji was all smiles and attended the event gracefully. Sabyasachi being her favorite designer, she had worn his creation on her wedding day as well. Rani was radiant in red with matching platform pumps, sindoor and chuda. Though, we wished she had not opted for the matching pumps. But this slight faux pas, didn’t make her glow fade. Rani Mukerji, who tied the knot to filmmaker Aditya Chopra in Italy in a secret affair made lot of waves. This being one the most anticipated weddings, Rani Mukerji and Aditya Chopra received lot of blessings from the B-town.

Diva’ni is Yash Raj Film’s fashion brand that was first unveiled last year on late filmmaker Yash Chopra’s birth anniversary. A special fashion show was held commemorating the director’s birthday and the launch of the brand which saw several Bollywood divas walked the ramp. Rani herself was one of the many stars that graced the ramp for the brand. Parineeti Chopra, Katrina Kaif, Sridevi, Anushka Sharma, Rekha, Juhi Chawla, Madhuri Dixit, Preity Zinta and King Khan- Shah Rukh Khan also walked the ramp.

The launch that took place on Thursday saw newbies Alia Bhatt, Parineeti Chopra, Arjun Kapoor. But, we won’t be wrong if we say that the spotlight was on the Chopra bahu!