Leonardo DiCaprico and Kate Winslet have come a long way since they were paired together in 1997 for the iconic film Titanic. We saw them reunite at the Golden Globes Awards and now at the Oscar Awards 2016.

Leonardo DiCaprico and Kate Winslet have come a long way since they were paired together in 1997 for the iconic film Titanic. They made their fans go crazy with their unique chemistry once again in 2008 with Revolutionary Road. The picture perfect couple shares a great bond both on-screen and off-screen. We saw them reunite at the Golden Globes Awards and now at the Oscar Awards 2016. (ALSO READ: Oscar Awards 2016: Leonardo DiCaprio breaks Oscar jinx, wins best actor)

The whole world is swooning to see their favourite stars pose together on the red carpet. Kate sizzled in a black off-shoulder floor length gown while Leonardo looked dapper in a black bow-tie suit at the Oscar Awards 2016. At the red carpet of the 88th Academy Awards, Kate was spotted by her Revolutionary Road co-star. As Kate and Leonardo swayed down the red carpet, they brought back the memories of the time they walked hand-in-hand back in 1998. As they posed for the pictures, everyone recalled the old days when they mesmerized the whole world with their magical chemistry. (ALSO READ: Oscar Awards 2016: Leonardo DiCaprio, Kate Winslet reunite at the red carpet) 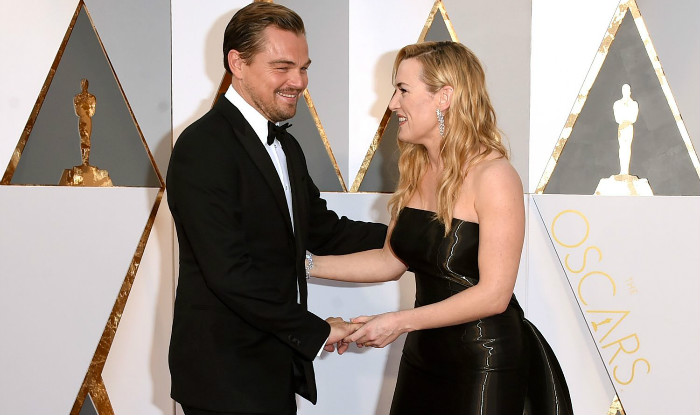 Have a look at this video that exhibits the lovely bond Leonardo DiCaprico and Kate Winslet share;

The Divergent actress has been praising her dearest friend since he got nominated in the Best Actor-Male category. Leo was nominated for his critically acclaimed film The Revenant and with no doubt took home the trophy for his excellent performance. The 40-year-old actress was nominated in the Best Supporting Actress- Female category for Steve Jobs, but lost to award to Alicia Vikander for The Danish Girl. Leo, on the other hand, was took home the Ocsars for the sixth time this year. (ALSO READ: Oscar Awards 2016 Predictions: Leonardo DiCaprio, Brie Larson to win Best Actor and Actress in a Leading Role)