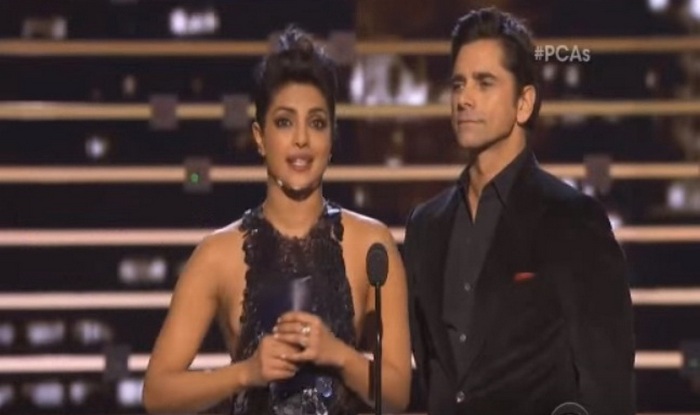 It’s no surprise that Bollywood star Priyanka Chopra has won the People Choice Awards 2016 for Best Actor in a New TV show for her American show Quantico. We expected her to win accolades for her role of Alex Parrish on the action drama that premiered in USA in 2015. What’s more, the actress was also co-host of the awards show along with John Stamos. Priyanka was overwhelmed with the love and support, and the People’s Choice Award that she got for Quantico. She said to the audience, “I would like to thank all those who voted for Quantico. My first year in America…and to come to another country and to get this kind of acceptance is, I guess, what America is all about. So, thank you all for accepting…. My mom, my manager, the cast and crew the writers, ABC… everyone. I’m really overwhelmed…”

But just as her fans in the auditorium were beginning to applaud her, John Stamos cut her short, saying that her talk couldn’t go on forever! “It’s just a two-hour show,” he said.

Priyanka Chopra is a former Miss World and an acclaimed actress in Bollywood. She will put some Hollywood stars to shame with her acting spunk. She is also a decent international singer and has collaborated with Pitbull and The Chainsmokers for her singles. So, it’s rather sad to see a woman like that being insulted on stage in what seemed like the usual jest between emcees. Did Priyanka feel bad? Whatever it is, we like the way she took it in her stride and let John Stamos speak, and the two carried on with the hosting.

Watch video to know how Priyanka Chopra was embarrassed on stage because of John Stamos at the People’s Choice Awards 2016!

Priyanka chose to share her happiness on Twitter instead. “I am so fortunate! Thank U to everyone who voted for me at the ‪#‎PCAs‬! My ‪#‎PCManiacs‬ – I am nothing without you! Big love”, she said.

I am so fortunate!Thank U to everyone who voted for me at the #PCAs! My #PCManiacs-I am nothing without you!Big love pic.twitter.com/Omg31wG7oa