Saif is indeed a doting father..

Look what we stumbled upon! Sara Ali Khan‘s throwback picture with daddy Saif Ali Khan that will instantly remind you of his picture with our favourite Taimur Ali Khan. Sara looks like Taimur’s twin in this throwback picture. We have made a collage of the star holding Sara Ali Khan when she was a baby and of him with son Taimur and the resemblance is uncanny. In both the pics, he is seen looking at them in a similar way.

Donning a pink tee with two side-parted pony-tails, Sara makes a sad face at the camera while papa Saif lovingly looks at his little girl. Taimur, on the other hand, seems like he is conversing with daddy Saif through his expressions. The picture of Saif and Taimur was taken during their visit to meet Soha Ali Khan’s daughter Inaaya for the first time since her birth. Taimur has become one the most followed celeb kids on social media and his popularity has surpassed that of some of the finest actors of Bollywood. Meanwhile, Sara’s throwback picture is just too adorable for words and is self explanatory why her half-brother Taimur Ali Khan is such a pro at posing for the shutterbugs. After all, it’s all in the genes… Take a look at the pic below. 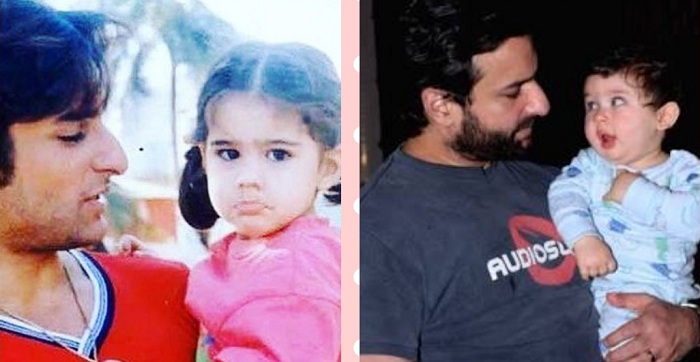 A few months ago, fans of the actor had made a collage of him holding his daughter, Sara Ali Khan when she was a baby and that of him with son Taimur. In those two pics, placed side by side, we could make out the resemblance between the two of them. Just the way, Saif is seen looking at both of them adoringly, in that collage he is seen planting a kiss on their cheeks. Not just that, coincidentally, both, Sara and Taimur are seen wearing blue clothes, making it an even adorable picture. Take a look of it below :

Meanwhile, Sara is gearing up for her Bollywood debut with Abhishek Kapoor’s Kedarnath, opposite Sushant Singh Rajput. A few weeks ago, the film was momentarily put on hold, due to a temporary fall out between the film’s director Kapoor and the producer, Prernaa Arora of KriArj Entertainment. However, things went back to normal after the conflicting parties reached a negotiation and began shooting for the second schedule. There are reports that Sara will also star in Hindi Medium 2.