The picture comes as a beautiful surprise at a time when there are increasing rumours about Farhan Akhtar and Shibani Dandekar's wedding in the media.

Veteran actor Shabana Azmi got clicked with Farhan Akhtar and his partner Shibani Dandekar at the special screening of Mee Raqsam, a feature film made by her brother Baba Azmi as a tribute to their father and eminent poet Qaifi Azmi. Dressed in a yellow saree, Shabana looked radiant and she posed with both Farhan and Shibani outside the theatre.

The picture comes as a beautiful surprise at a time when there are increasing rumours about Farhan and Shibani’s wedding in the media. The couple is reportedly getting married sooner than expected this year and has even begun their wedding preparations. Shabana, who’s the second wife of Farhan’s mother, shares a happy relationship with the actor and they even went out for a family dinner on Sunday evening. 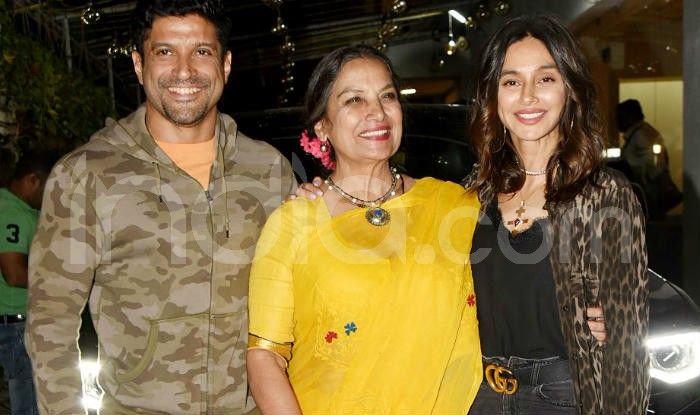 Meanwhile, it was a star-studded screening organised by Shabana for the debut film of his brother which has been entirely shot in their father’s hometown Mijwan. Earlier, talking about the film and her brother’s desire to fullfill the wish of their dear father, the veteran actor had said, “I’m in Mijwan with my sister-in-law Tanve (Baba’s husband). The District Magistrate of Azamgarh gave the muhurat clap for Baba’s feature film Me Raqsam (I Dance). It’s being shot in a start to finish schedule in Mijwan with 14 year old resident of Mijwan, Aditi Sharma playing the protagonist. Danish Husain plays her father. It is the story of a humble tailor who fights all odds to fulfil his daughter’s dream to become a dancer. Once Abba (father Kaifi Azmi) had asked Baba in passing if a film could be shot in Mijwan. In Kaifi’s centenary year Baba pays the most fitting tribute to his father’s desire.”