Shah Rukh Khan’s Plans for AbRam Have Nothing to Do With Bollywood or Cricket! Read Details

Star kids have become paparazzi’s favourites and the case is no different with Shah Rukh Khan’s kids Aryan, Suhana and AbRam Khan. Every other day, we see speculations over Aryan and Suhana’s Bollywood debuts. We have also heard that while both will make a career in films, only one of these two kids will be in front of the camera, while the other will call the shots from behind the scenes. But we certainly know that SRK’s plans for AbRam have nothing to do with Bollywood. The actor was recently at the IPL 2018 game between KKR vs RCB, accompanied by his kids where he divulged about AbRam’s interests and his plan for his future.

Talking to a news channel, SRK said, “AbRam is not yet playing cricket, he is playing a bit of football. I would like him to play field hockey for India.” Interestingly, Shah Rukh payed a hockey coach in “Chak De! India” and perhaps his love for the sport stemmed from that experience. It can be recalled that just a few weeks ago, Khan and his son AbRam took off for a vacation in the snow-clad Alps where the little one indulged in speed skiing and also won a tournament.

A proud SRK took to social media to share pictures with the little sports star, holding his trophy in what looked like his fan boy moment. We know that SRK has been spending all of his off duty time with AbRam and now that he’s got the time to influence his interests, perhaps that’s what SRK wants, to see his youngest child grow up with a keen interest in sports and perhaps take that as a career path as well. 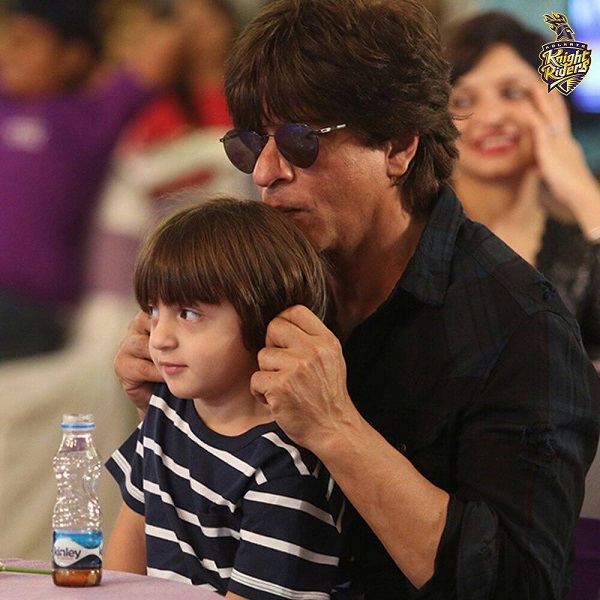 On the work front, SRK is busy shooting Zero with Anushka Sharma and Katrina Kaif and is also scheduled to start preps for astronaut Rakesh Sharma biopic. And amid all this, we will also see him cheer for his team KKR at the ongoing IPL 2018 matches.