Television actor Kushal Punjabi, who was last seen in Ishq Mein Marjawan as Advocate Danny Manchanda, has passed away last night. The cause of his death is depression. Spotboye reported that Kushal hung himself at his house in Bandra last night. All we can say is, he’s gone too soon as he was just 37. Kushal’s close friend Karanvir Bohra confirmed the news and wrote down an emotional post for the late actor. “Ur demise has shocked the hell out of me.I’m still in denial @itsme_kushalpunjabi. I know you are in a happier place, but this is unfathomable.
The way you lead your life really inspired me in more ways than one….but what was I to know”, he wrote.

“Your zest for dancing, fitness, off-road biking, fatherhood and above all that, that smiling face of yours, your happy-go-lucky nature your warmth all that was such ingenuity. I’m gonna miss you so much #kushlani. You will always be remembered sad a guy who lived a full life. #dancingdaddy #fit #lifeenthusiast #biker #smilingface #onelifeliveitright#restinpeace #omnamoshivaya”, Karanvir further wrote on his Instagram handle.

Karanvir and one of Kushal’s best friends Chetan Hansraj confirmed that it was a case of suicide. Vikas Kalantri and Karan Patel too commented under the post hinting that Kushal was depressed. “🙏RIP🙏 my brother. Guess Its true when they say, “The happiest Faces hide the Most saddened Hearts”. Seeing Your spirit and zest for life, never in my wildest dreams would i have thought that you will bid your final goodbye to life in a way that will send a chill down our spines every time we think of you. @itsme_kushalpunjabi you will be missed forever. Hope and pray you are inna better place. 🙏. Still can’t believe you’re gone. Gone too soon. 😢🙏”, Karan wrote.

Kushal married Audrey Dolhen in November 2015 and the two were blessed with son Kian. Two days back, Kushal shared a cute picture with his son on his Instagram. 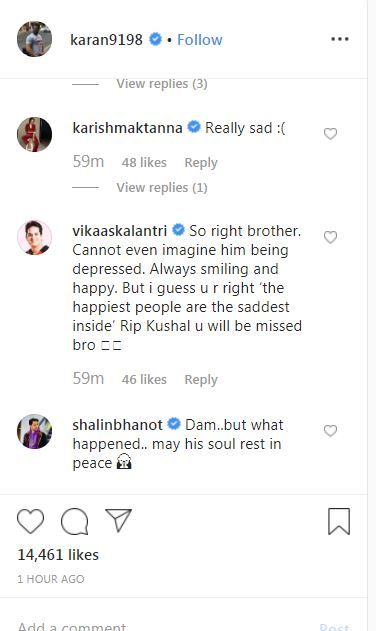 Kushal Punjabi started his career as a model and dancer. He further ventured into acting with a television series called A Mouthful Of Sky. He has worked in various films and TV shows like Kabhi Haan Kabhi Naa, Kkusum Kaal, Lakshya, Dhan Dhana Dhan Goal, Salaam-e-Ishq: A Tribute to Love, Aasman Se Aage, Teri Meri Love Stories among others.