Bigg Boss 12 Updates: Megha Dhade discusses her presence in the game with Romil Chaudhary, who asks her to enter his group, the Happy Club. Jasleen Matharu is missing Anup Jalota and Somi Khan, Saba Khan. Romil makes fun of Somi over her ‘uncomfortable’ statement on Deepak Thakur. Shrishty Rode discusses the same statement with Rohit and tells him that Somi said so about Deepak to her and she promised to keep it a secret. Romil tells Somi and Surbhi Rana that Megha is trying to break the groups inside the house and they should not let her break their group. Surbhi and Somi discuss a strategy to not let Dipika Kakar be seen on the show.

The next day — 43, begins to the tunes of Aap Ka Kya Hoga. Deepak reveals he couldn’t sleep the last night. Somi helps him with his injured hand. Bigg Boss announces that one contestant would be given an opportunity to celebrate Diwali with his/ her family. The nomination process begins. Contestants are asked to take two names they want to save from eliminations this week. 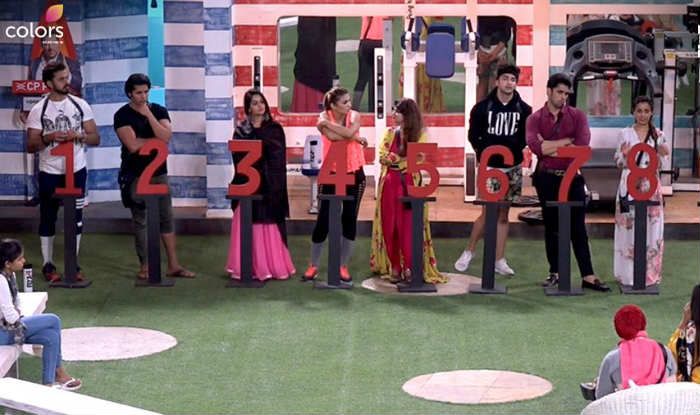 Romil discusses who are the two names Shrishty has taken. Jasleen asks Sreesanth who are the two people Sreesanth saved. He tells her he saved her when asked. Dipika tells Urvashi to be more active in the game and stop thinking about who’s trying to ignore her. Surbhi asks Deepak to confess his feelings to Somi. He apologises to Somi for making her feel uncomfortable. She tells him that she doesn’t have any feelings for him and she loves him like a friend. Surbhi makes fun of Deepak.

Dipika and Megha discuss their strategies and the game. Urvashi, KV and Shrishty look at them from far behind and discuss how Megha is desperately trying to get into their group through Dipika. Urvashi tries to sort out things with Deepak. He tells her that she will never be able to speak her mind with the people she is friends with currently.

Bigg Boss asks the safe contestants to make the nominated contestants stand from 1-9 on the basis of which one has a least possibility to get evicted this week. Contestants keep Sreesanth on No. 1, KV on No. 2, Dipika on No. 3, Jasleen on No. 4. Megha is given the position of No. 5, Rohit is asked to stand at No. 6, No. 7 goes to Shivashish, Shrishty occupies the No. 8th position and Urvashi stands the last. Somi is of the opinion that Shrishty has a strong point of view and therefore she deserves a better position. Rohit offers her his position. Deepak calls him out for his give-up attitude. Shrishty is asked to exchange position with Shiv.

Jasleen argues with KV over her position. Shrishty is also unhappy with her position and she discusses this with the Happy-club. Jasleen asks Deepak to not talk to her. KV has an argument with Sreesanth. He then tells Dipika that Sree is a highly immature human being and respects no one in the game. KV has been waiting for Sreesanth to sort out things between them. But, Sreesanth didn’t come out. Dipika discusses the same with Sreesanth and asks him about the reason behind his behaviour with KV and Shrishty. Dipika tells Sreesanth that he’ll have to play the game with her, KV, Shiv and Shrishty together and not alone. Watch out this space for all the latest updates on Bigg Boss 12!