Bigg Boss 12: Twitterati Are Upset With Romil Choudhary For Misbehaving With Sara Ali Khan During a Task

Bigg Boss 12 News: Even Romil Choudhary's ardent supporters are upset with him for misbehaving with Sara Ali Khan

Sara Ali Khan is on a promotional spree for her upcoming film, Kedarnath, which is releasing this week. The actress has been paired opposite Sushant Singh Rajput in this Abhishek Kapoor’s directorial. The duo is visiting places to promote the movie and recently, they also appeared on Salman Khan‘s show, Bigg Boss 12. The two met the contestants inside the house and their visit was aired in the Weekend Ka Vaar special episode a few days back.

However, there was something that happened on the show which has irked the show’s fans on social media. Sara and Sushant initiated a task with the contestants inside the house. As part of the game, housemates gave the tag of ‘ehsaan-faramosh‘ contestant of the house to Romil. As a result, Romil Choudhary had to get tied up to the Wheel of Misfortune. Sara, who was coordinating the task, offered a pair of glasses to Romil to save his eyes from being hurt. Romil, however, upset her with a rude remark. He said, “Koi nahi madam meri aankhen hai. Lag gaya to lag gaya” (it’s alright madam, these are my eyes, let it be…). Sara, who was evidently taken aback with his comment, replied by saying, “Hadd hai...” 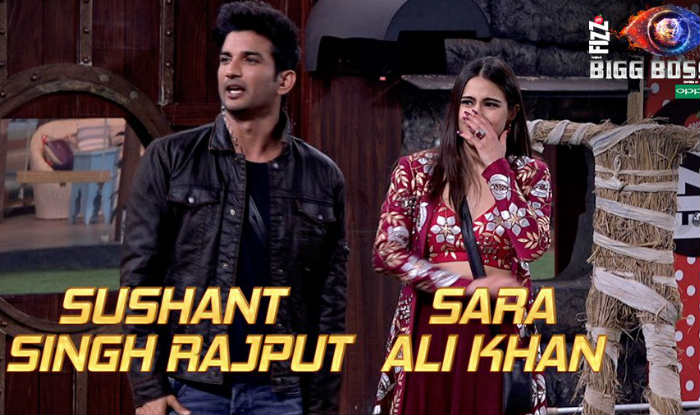 This was not it. Later, when Sara and Sushant were going to leave the house, the actress called the contestants to dance with them on a song from their film. While everybody else happily participated, Romil refused to join when the actress called him.

The show’s viewers, especially Sara’s fans couldn’t warm up to Romil’s outright inappropriate behaviour with a guest on the show. Twitterati are slamming the man, including those who have been Romil’s ardent supporter throughout the season. Check these out:

Romil interfered for no reason. He himself used to tease Megha a lot.

Romil is cunning.. Very cunning. Yesterday he was so rude to sara ali khan. That was insane

@ColorsTV #RomilChoudhary #Sreesanth
Romil puppy na ghar ka na ghaat ka lag raha hai it’s better to Evict him because he has no stand in the house… He got disrespected from SK on WKW so much and he was so rude to Sara Ali Khan shame on him. Second looser like sree.😹😹😹😹👎

#RomilChoudhary not done, “Lag Gaya Toh Lag Gaya, Meri Aakhein Hain.” How can you talk to a guest like this. #SaraAliKhan was take aback with your rude behaviour!! #BB12 #BiggBoss #ColorsTV #BiggBoss12 #SalmanKhan

Romil is one of the strong contestants this season. He was brought back by the makers after being evicted in the initial few weeks on the show. Romil was touted as the leader of the Happy Club inside the house. It’s basically a name given to Romil’s group; the members include Surbhi Rana, Deepak Thakur, Somi Khan and Romil himself. However, as shown in the current episodes, Romil has singled himself out in the game after initiating fights with each member of his group. There’s no Happy Club anymore.