Kasautii Zindagii Kay Latest News: Anurag‘s friend calls him out for an important work. He leaves Prerna’s house. Madhuri sees him and wonders where he is going in such a hurry. Anurag’s friend tells him that he found Naveen and Madhuri’s entry in a register at the marriage registrar’s office. Rajesh, Anupam and Moloy play cards and Madhuri enters the room to offer them tea. As she leaves the room, Moloy tells Rajesh that Madhuri smiles in a weird way whenever she looks at him.

Anurag and his friend go out to find out if Madhuri is Naveen’s first wife. Meanwhile, Shivani confronts Prerna about the real reason she’s getting married to Naveen. She tells her that she has found a copy of the eviction letter and that’s why she said yes to marrying Naveen. Prerna denies her allegations. Shivani then tells her that if she is not ready to tell her the truth, then she is going to show the paper to everyone in the family. Prerna stops her and tells her that she has a responsibility towards their parents and will not let them move out of the house because of the loan. She then tells Shivani that she shouldn’t reveal the truth to anyone because she is doing a sacrifice for the sake of her family. 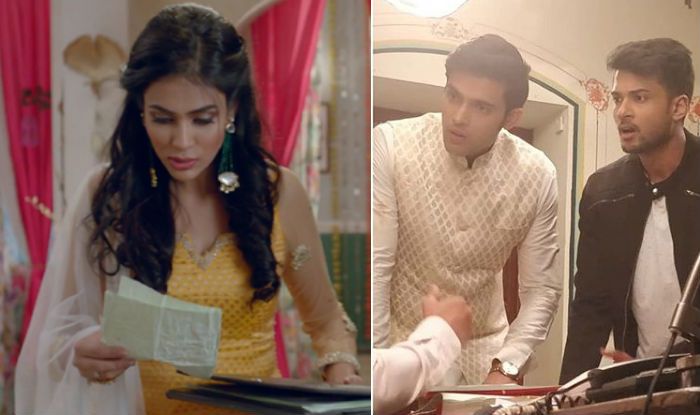 Shivani understands Prerna’s position. She tells her that she’s a proud sister today. Prerna leaves the room. Shivani then tells herself that she won’t let Prerna go ahead with her decision. She decides that she will let Anurag know  everything.

Anurag and his friend have a hard time convincing the marriage registrar to share the certificate they are looking for. Anurag gets angry and drags him from his collar. Prerna sits to apply haldi as part of the ceremony. She then starts imagining Anurag applying haldi on her cheeks. She recalls the moments she shared with Anurag in the past. A guest asks Naveen to apply haldi on Prerna. Prerna doesn’t like it. Naveen asks her if he’s missing Anurag. He then tells her that he was joking. Prerna, however, tells him back that she was indeed thinking of Anurag and missing him. Naveen is taken aback. The pre-cap of the next episode shows Anurag telling Naveen on call that he will not let him marry Prerna because the culture doesn’t approve of two marriages. Watch out this space for all the latest updates on Kasautii Zindagii Kay!