Kasautii Zindagii Kay Episode 3 Updates: Mohini is upset because Moloy asked her to not blame Prerna’s father, Rajesh, for the fire at the Durga Puja Pandaal. Meanwhile, at the Sharma house, Prerna’s mother and father are arguing over the Basus. Her mother says that Anurag is the only person who respects them. She then sends Prerna to the Basu house to give the Prasad to Moloy, especially to Anurag since he saved Prerna’s life at the Puja.

Prerna gets inside Anurag’s room and finds his uncle, Navin (Mohini’s brother) there. The camera shows the man setting evil eyes on Prerna. He tries to flirt with her. Meanwhile, Anurag enters the room and at the same time, her dupatta gets stuck to the shoes of Navin and tears off. He promises to get her a new dupatta.

A sweet conversation happens between Anurag and Prerna. They make each other laugh and leave for college together. Prerna asks Anurag to be on time at tonight’s Durga Puja. Mohini enters the picture and meets Navin. She tells him that she’s not letting him go anywhere, now that he has returned to India after so many years from London. Prerna senses Navin’s ill intention and leaves the Basu house in a hurry.

Everyone is at the Durga Puja Pandaal since it’s the Vijaya Dashmi day. Prerna enters the Pandaal holding a huge box meant to be for the stall her mother is managing. Anurag helps her. In the next scene, we see Anurag asking his mother to buy a few things from Veena’s, Prerna’s mother’s stall.

Moloy calls Anurag and asks him to fix something at the Pandaal. Mohini visits Veena’s stall and buys shawls from there. She asks Prerna to put the packets inside their car, parked outside. Anurag is trying to tighten the rope but just when he fails to do it, Prerna comes to his rescue. Together, the two hold the rope and fix everything, thereby, coming closer. Navin enters the Pandaal. He follows Prerna and puts a dupatta on her head. Prerna, along with her parents, gets shocked. He tells them that since he tore Prerna’s dupatta by mistake, he has gotten a new one for her this time. 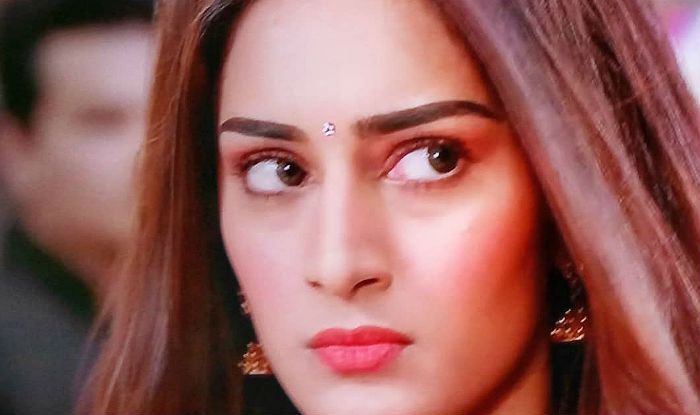 Moloy asks Prerna and family to perform the puja dance with Mohini and others. While Prerna is picking up the burning diya, she gets hurt. Navin rushes to her, holds her hand and putz his handkerchief on her hand. Prerna feels uncomfortable and goes away. Anurag sees all this from far behind. While Prerna is dancing, Navin seeks an opportunity to come closer to her. Anurag again sees him walking towards Prerna.

Will Anurag save Prerna from Navin’s harassment? Watch out for the next episode. Stay tuned for all the latest updates and gossip on Kasautii Zindagii Kay!