Ranveer Singh appeared on Koffee With Karan 6 with Akshay Kumar. Together, the two brought the house down on Karan’s show as they engaged the audience with their funny antics. Ranveer especially, owing to his oh-so-energetic self, showed extraordinary enthusiasm while sitting on the famous Koffee couch. What stole the show were his quirky statements and revelations. Ranveer talked about his relationship with Deepika Padukone, his bond with Akshay Kumar, and how Karan Johar gifts him the most bizarre looking outfits in the world. Here are a few interesting statements that he made on the second episode of Koffee With Karan 6:

On being a fan of Akshay Kumar:
Ranveer revealed a lovely story about the first time he met Akshay Kumar. He said he was 6 when Akshay made his debut in Bollywood. He then went to talk about an incident when he landed up on the sets of Akshay’s film to meet him. However, Raveena Tandon, who was also shooting with Akshay, wasn’t in a good mood, the security guards on the sets had almost prepared themselves to shoo Ranveer away. Later, as a disappointed Ranveer was leaving the sets, he felt a hand on his shoulder and it was Akshay Kumar asking him to stop by. Ranveer said it was the first time he got to know about Akshay’s generosity and humility.

On Karan Johar gifting him clothes
Ranveer’s sense of style is quite weird. He mixes strange prints and colours with different detailing and comes out with outfits which only he can pull off. On Koffee With Karan, he revealed that not all the bizarre outfits he wears belong to him. Ranveer said some of them are actually a gift from Karan. He then went on to explain that Karan buys clothes for himself but after realising he can’t carry them well, gifts those to Ranveer.

On Ranbir Kapoor:
Karan asked Ranveer to set-up a Tinder bio for Ranbir Kapoor. Ranveer goofed up a bit by curating a one-line introduction for Ranbir. He said Ranbir’s bio would read ‘I have many talents, even outside bedroom’. 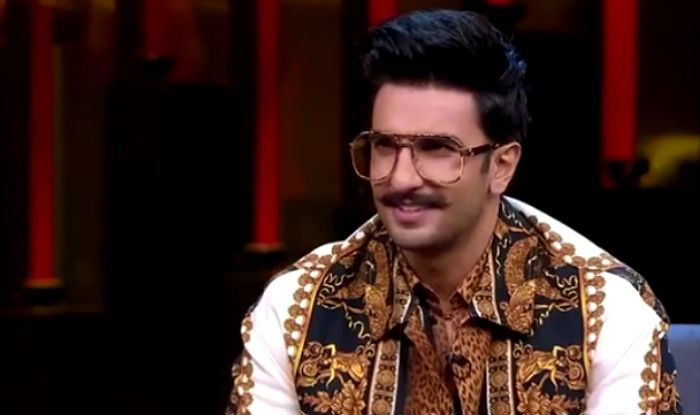 On Deepika Padukone:
Ranveer will soon be removing the boyfriend tag as he getting to married to his lady love Deepika Padukone on November 14 and 15. Ranveer revealed on the show that he is not a good boyfriend and always comes late.

On Kuch Kuch Hota Hai 2:
In a rapid-fire round, Ranveer charted out the entire cast for Karan Johar’s Kuch Kuch Hota Hai 2. He said he would like to do the film with Deepika Padukone, Alia Bhatt with Ranbir Kapoor stepping into the shoes of Salman Khan to perform the role of Aman Mehra.

Well, trust Ranveer to tickle your funny bone like no other!