Varun Dhawan and Natasha Dalal return from their Swiss holiday and get a warm welcome at the airport from the team of Street Dancer 3D.

Actor Varun Dhawan and his girlfriend Natasha Dalal returned to Mumbai after celebrating New Year in Switzerland with many other Bollywood celebrities. As soon as Varun landed at the Mumbai airport, the team of his upcoming film Student of The Year 2 stood outside to welcome him with a special performance.

Varun exited the Mumbai airport and found out that his co-star from the film, Nora Fatehi, welcomed him with a sizzling performance on Haye Garmi song. Varun himself joined the actor outside the airport and entertained the crowd. Natasha was seen enjoying the performance as she got clicked wearing a black top and a pair of leather pants. Both Varun and Natasha looked cute together. Check out these photos of Varun and Nora performing in front of the banner that read ‘Welcome Back The Street Dancer’. 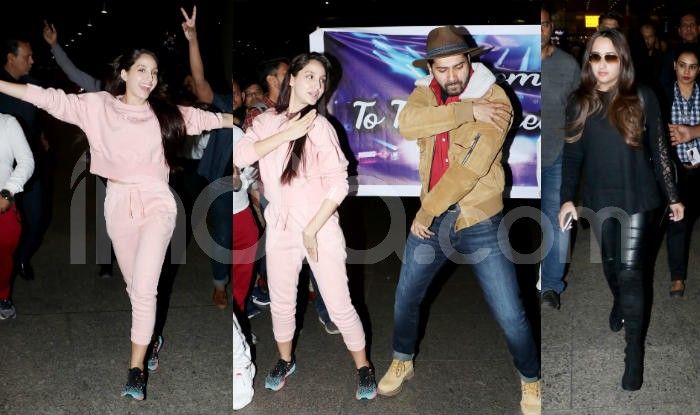 Meanwhile, Varun and Natasha were joined by Kareena Kapoor Khan-Saif Ali Khan, Jacqueline Fernandez, Karisma Kapoor, Virat Kohli and Anushka Sharma among others during his holiday in Gstaad. The photos and videos of them catching up to welcome 2020 together went viral on social media. In one picture, everyone dressed up from head to toe for a special New Year dinner at Swiss Alps.

On the work front, Varun is currently gearing up for the release of Street Dancer 3D as the big Republic Day release this year. Following it would be Coolie No. 1 remake with Sara Ali Khan and then Mr. Lele with Bhumi Pednekar and Janhvi Kapoor. The actor has also teamed up with his Badlapur director Sriram Raghavan for the biopic of celebrated army officer Arun Khetarpal.