Are you ready to see Thala Ajith's rage in Vivegam?

After their successful association for Veeram and Vedalam, Thala Ajith and director Siva are back again with Vivegam. The film is all set to hit screens on August 24 worldwide and one can see the storm coming! What’s new is, it is bigger than ever and might take over the frenzy created by the likes of Rajinikanth’s Kabali and Prabhas’ Baahubali: The Conclusion.

Trade analysts have been keeping us updated about the advance booking figures of the film and fan frenzy that awaits the film’s release. In fact, some industry insiders have already seen the film and they have dubbed it better than Thala’s Vedalam.

It can be recalled that the Diwali 2015 super hit film had created opening day record by grossing Rs 15.5 crore in Tamil Nadu alone. This record was later shattered by Rajinikanth’s Kabali (2016) which minted Rs 21.5 crore gross on first day. As per trade analyst Sreedhar Pillai, Vivegam might easily hit a higher number due to the increased ticket rates due to GST implementation and the mass hysteria. ALSO READ: Apart From Kick-Ass Action Sequences, Watch Out For Ajith And Kajal Aggarwal’s Enchanting Chemistry 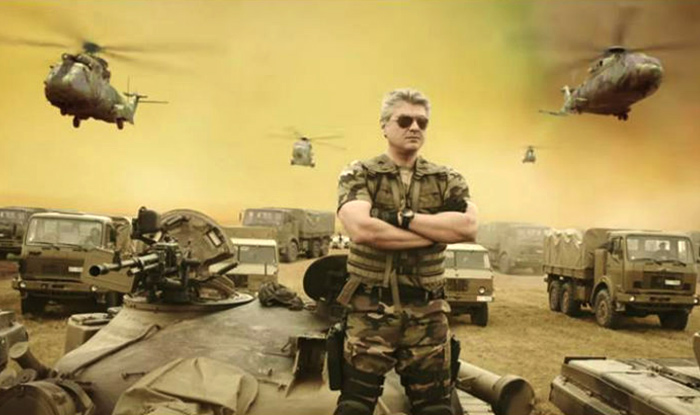 Thala Ajith in a still from his August 24 release Vivegam

According to other trade expert Sumit Kadel, the advance booking is so strong that one can expect to see almost 70% shows of Vivegam across four days long Onam weekend sold out across Tamil Nadu alone. In fact, he is predicting that the film might make around Rs 30 – 35 crores in its opening day itself. What also works for the film is that it is the solo release.

I am expecting #vivegam to collect over 30-35 crs on its opening day at the box office. History will be made for sure #Thala #ajith

Talking about the opening in Kerala, which has remained a territory unaffected by Thala magic, Vivegam is all set to create history with 300+ screens and 1000+ shows on Day1. As per film critic and analyst Kaushik LM, “Vivegam is in elite company alongside Baahubali 2, Kabali. Big opening awaits Thala Ajith.”

Baahubali 2 released across a record 315 screens in Kerala while Kabali had enjoyed opening in 306 screens.

Talking about international screenings, Vivegam is releasing in Malaysia in 109 cinemas, across 700 screens, making Vivegam Thala’s biggest ever release in Malaysia. As per trade analyst Ramesh Bala, Vivegam is also the first Tamil movie to be screened in Hungary. It also has the second biggest release in Australia with 29 locations, second to Baahubali 2 which released in 41 locations and followed by Kabali that hit 23 screens.

Apart from Thala Ajith, the film also stars Vivek Oberoi, Kajal Aggarwal and Akshara Haasan in key roles. The film also has a treat for Sivakartikeyan fans since his film Velaikkaran’s teaser is attached to Vivegam. In the trailers, Thala promised “you will see my rage”. Looks like he is all ready to keep his promise! Are you?