The awestruck performances of the lead actors with enthralling plot is something that will keep you hooked till the end.

The director of the film Bejoy Nambiar has once again nailed it in ‘Wazir’. The awestruck performances of the lead actors – Farhan Akhtar and Amitabh Bachchan with enthralling plot is something that will keep you hooked till the end. This movie is definitely a wonderful start to year with Farhan and Big B sharing screen space for the first time. In the Vidhu Vinod Chopra and Rajkumar Hirani produced film, you will see emotions, actions, suspense and off course the much intense game of chess that brings two unusual characters together.

In this much awaited thriller, Farhan Akhtar plays the role of Danish Ali, a dedicated ATS officer. It is just for a brief period he is leading a joyous life with his wife Ruhana (Aditi Rao Hydari) and daughter Noori. But things change instantly for him when his only daughter Noori gets killed in a terrorist shootout. His wife decides to live alone blaming Danish for all the loss in their life. Danish who finds hard to accept the fact, takes revenge from the terrorist and later tries to kill himself at his daughter’s graveyard. That’s when Pandit Omkarnath Dhar a.k.a. Panditji (Amitabh Bachchan) makes his entry. (ALSO READ: Wazir quick movie review: Farhan Akhtar once again delivers an inimitable performance!)

Panditji is a paralysed chess grandmaster. He makes ways where Danish ends up at his place. With time their bond grows as Panditji starts teaching him the mind game – chess! As time passes by, Danish learns that even Panditji lost his daughter and his wife. It was said that Panditji’s daughter had fallen from the stairs of the Welfare Minister Yazaad Qureshi’s (Manav Kaul) house. But more than an accident, it was claimed a murder by the grandmaster. Danish who was suspended takes the call to investigate his dear friend’s daughter’s case that was almost closed by the officials. (ALSO READ: Wazir star Amitabh Bachchan says ‘writer’ is the best actor in the film) 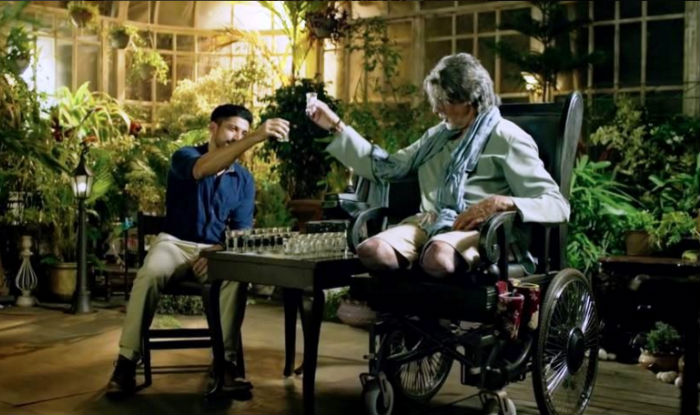 As Panditji tries to confront the Welfare Minister, the villainous Wazir (Neil Nitin Mukesh) makes his entry that will leave you stunned. During this investigation that is revolving like the game of chess, Wazir attacks Panditji. And this grandmaster is sure, that his unusual bond with Danish will help him find justice but how? How is Wazir connected to Panditji? What is it that made Panditji pull Danish into his life? Why he wanted Danish to understand the special Omkar style chess game? This thriller action is ended by the ‘Real Wazir’ in a classic way and that is something you got to watch out for.

Though Ruhana (Aditi) has limited part in the film, she still plays an important role. Her passion for dance, concern for the family and affection for her husband Danish (Farhan) is expressed beautifully through her eyes. Farhan and Aditi’s never-seen-before chemistry is something that you will really love. They have played a perfect couple in reel life. (ALSO READ: Farhan Akhtar, Aditi Rao Hydari’s lovemaking scenes cut from ‘Wazir’)

The bond that Danish and Panditji shares is unusual. It shows that there is no age for friendship and one could go to any extent to save that bond. The respect for this unusual friendship that built over the game of chess makes the main plot of the film.

The two characters Wazir (Neil Nitin Mukesh) and S.P. (John Abraham) had literally limited role but it plays the main part of the story. Their performances were brilliant.

More than the plot, you will be amazed the brilliant performance delivered by the lead actors – Farhan and Big B. It never looked that they are working together for the first time. Every emotion and action is executed exceptionally. The dialogues for the two characters have been penned down really well.

The songs in the film have been beautifully written, composed and sung. In fact it relates to the scenario that is happening throughout the film. (ALSO READ: Wazir song Tu Mere Paas: Ankit Tiwari sings the melodious track featuring Farhan Akhtar and Aditi Rao Hydari)

This is definitely a must watch movie. It will hit the silver screens tomorrow, January 8. Without any doubt this game of chess would be loved and leave you surprised for sure.