After winning the historic Test at Melbourne Cricket Ground against Australia on Sunday, opener KL Rahul clicks a winning selfie, which features all the players and the support staff of the Indian Cricket Team.

India vs Australia 3rd Test Melbourne: After winning the historic Test at Melbourne Cricket Ground against Australia on Sunday, opener KL Rahul clicks a winning selfie, which features all the players and the support staff of the Indian Cricket Team. India won thrashed Australia by 137 runs to take an unassailable 2-1 lead in the Border-Gavaskar Trophy. Speedster Jasprit Bumrah starred with the ball with a nine-wicket haul for the match as India win their 150th Test ever and become only the fifth team to do so. Also Read - IPL 2021: Ton-up Devdutt Padikkal, Run-Machine Virat Kohli Power RCB to 10-Wicket Win Over RR to go Top of Points Table

Here’s the winning selfie which was uploaded by KL Rahul on his Instagram story: Also Read - Devdutt Padikkal Slams Fastest Century by Uncapped Player in IPL History During RCB vs RR Clash 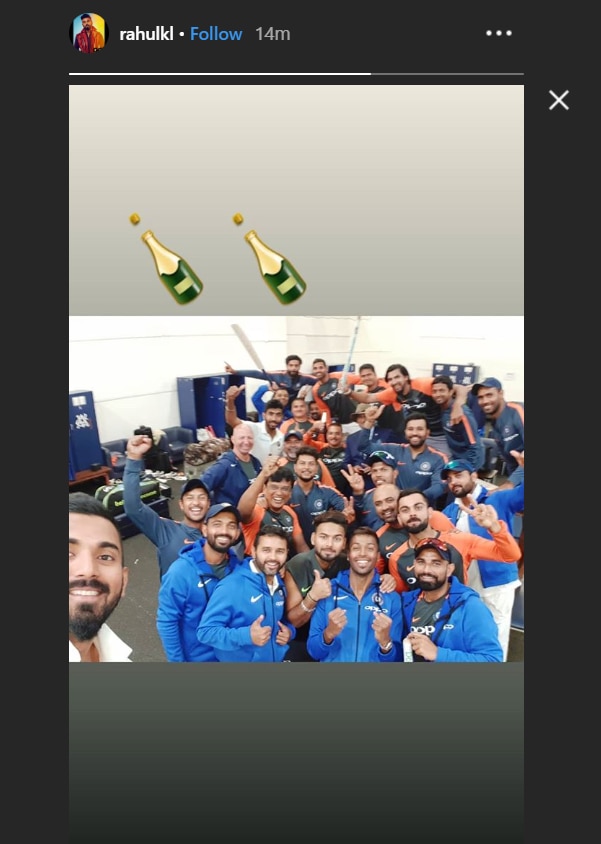 KL Rahul, along with Murali Vijay was dropped off in this match due to their poor performance in the first two Test matches. He scored only 48 runs in four innings whereas Vijay bettered it by a run. They both were replaced by Mayank Agarwal and Hanuma Vihari in this Test and lived up to the expectations and were the unsung heroes of this historic victory. Also Read - Match Highlights RCB vs RR IPL 2021: Ton-up Devdutt Padikkal, Virat Kohli Power Bangalore to Comprehensive 10-Wicket Win Over Rajasthan

This is also India’s first victory at the Melbourne Cricket Ground since 1981 when Kapil Dev starred with the ball to help India beat the hosts.

In the post-match presentation, Kohli said this win have gained them more confidence and will leave no stone unturned to make it 3-1 at the SCG. The fourth and final Test starts on January 3, 2019.