2nd ODI Adelaide: Yuvraj Singh cannot stop laughing over Shikhar Dhawan’s latest picture with ‘Detective Jaddu’. After the 34-run loss to Australia at SCG in the first ODI, Shikhar Dhawan recently took to Instagram and posted a picture with Ravindra Jadeja and captioned it as ‘Detective Jaddu’. While Harbhajan called Jadeja ‘Karamchand’, a fictional character from an Indian detective TV series, Yuvraj and Saha replied with rolling on the floor laughing emojis. Wicketkeeper Wriddhiman Saha too commented on the picture and it seemed no one could keep a lid on their laughter. Also Read - Australia vs India ODI in Sydney: Predicted Playing XIs, Pitch Report, Toss Timing, Squads, Weather Forecast For 1st ODI

Here is how the cricketers reacted: 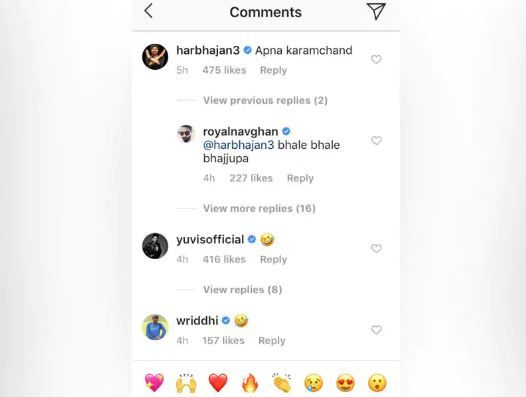 Dhawan was out for a golden duck in the first ODI, it was the first time in his ODI career that he had been dismissed off the very first ball. Jadeja was decent with the ball. India will look to bounce back at Adelaide after losing to Australia by 34 runs at SCG.

Meanwhile, U-19 World Cup star Shubman Gill and all-rounder Vija Shankar have been named as the replacement of KL Rahul and Hardik Pandya for the remaining ODI series against Australia and the upcoming tour of New Zealand. On Friday evening, the Supreme Court-appointed Committee of Administrators (CoA) suspended both the players, Hardik, and KL Rahul until further notice and has been sent home from the Australian tour.

It’s a maiden call-up for 19-year-old and is set to make his debut in the ODIs against the team like Australia. He has been in a good form in the domestic circuit, wherein he has smashed more than 1000 runs in 9 matches. In Ranji Trophy also he made his mark by slamming 790 runs in 10 innings at a massive average of 98.75. Earlier, it seemed Agarwal would be the choice for the selectors as he had a fairy-tale Test debut in the recently concluded four-match series against Australia, where he featured in the last two Tests and scored 195 runs off three innings, which laid the foundation of India’s mammoth innings.